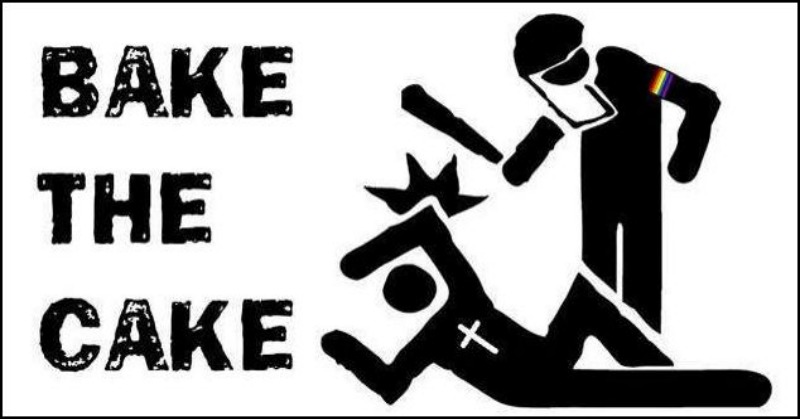 Remember the bigotry and hatred against a Christian bakery in Oregon because the owners didn’t want to go against their religious beliefs and bake a cake for a lesbian wedding?

Some interesting and excellent news has come out of Oregon as a result.

The mom and pop bakery was not only fined $135,000, but they were literally put out of business because of the vitriol, bigotry and hatred railed against them by Democrats and the ‘Gaystapo’ for daring to practice their protected right of Religious Freedom.

The Democrat who was responsible for the horrific treatment of this couple was Brad Avakian, and he just got served a dose of justice.

Brad Avakian has served as commissioner of the Oregon Bureau of Labor and Industries since 2008. In that role, he achieved national notoriety for investigating Sweet Cakes by Melissa, a bakery that refused to furnish a wedding cake for two lesbians on the grounds that doing so would violate the owners’ Christian beliefs. In 2015, Avakian levied a $135,000 fine on the store’s owners, Aaron and Melissa Klein, declaring that their refusal to produce the cake wasn’t protected by the First Amendment and instead was simply illegal discrimination. In October, the bakery shut down entirely.

While the Kleins’ business was going downhill, Avakian turned his sights to higher office. In last week’s general election, he ran for Oregon secretary of state. But in an upset, Dennis Richardson, a former state representative and gubernatorial candidate, trounced Avakian. Richardson will become the first Republican to win an Oregon statewide office in 14 years, and the first Republican secretary of state since 1985.

It’s pretty telling about Oregon that no Republican has held statewide office in 14 years, but it’s even more telling that they actually had the cajones to get rid of such a horrible little man like Avakian. Maybe some of those on the Left realized that the Bill of Rights is in place to protect ALL people, not just those who they see fit.

You don’t have to be a Christian to see that these people were targeted. Neither Avakian or the ‘Gaystapo’ targeted Muslim or Jewish bakeries who would have the same reaction as the Christian bakery. Religious Freedom is one of the fundamentals of this country, unless you’re a Democrat.

If you’re a Democrat, the only people who have protected Religious Freedom rights seem to be those who aren’t Christian.

Kudos to Oregon voters for ridding their state of at least one left wing bigot. Maybe voters realized that if the state is allowed to attack one religion, their religion could be next.