A major county Democratic Party in Arizona announced that it would be celebrating the Fourth of July in a decidedly non-patriotic fashion.

The Pima County Democratic Party advertised a “F*** the Fourth” Independence Day event on its official Twitter feed on Friday.

Unsurprising, the tweet was deleted a few hours later, but not before multiple screen shots had been taken of it: 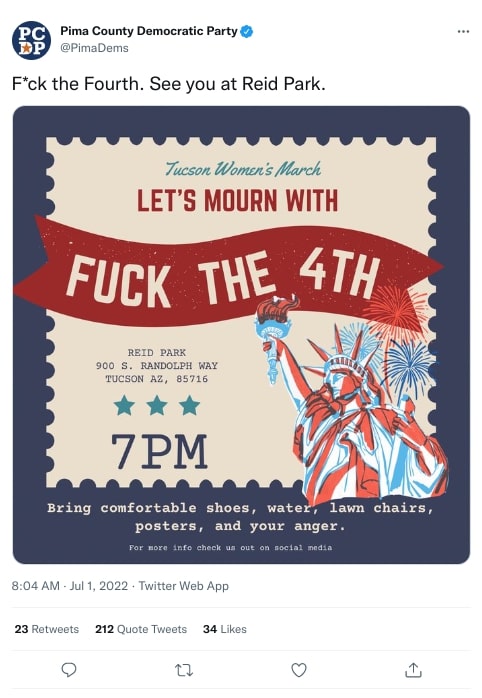 The event was slated for Reid Park in Tucson, Arizona.

A graphic for the event billed it with the Tucson Women’s March, and the protest was framed as a mourning for the end of the Roe v. Wade Supreme Court precedent.

Pima County is the second-largest county in Arizona.

Arizona itself is one of the most politically competitive states in the country. The state will hold elections for governor and a U.S. senator in November.

The county party also advertised the event on its Facebook page, but that post has apparently also been deleted.

In another post, the party pledged not to celebrate Independence Day until the federal right to abortion was restored. That post was inexplicably still present on Facebook after others had been taken down.

The anti-American bent of the planned protest attracted criticism from Twitter users.

Others questioned the wisdom of naked anti-American rhetoric from a major party months before an election.

The left hates America. Remember that on Election Day.

Critics of the Democratic Party pointed to the tweet as evidence of the party’s anti-Americanism.

The Fourth of July commemorates the day on which the Declaration of Independence was ratified by the Continental Congress in 1776. American self-governance would later lead to the Founding Fathers’ creation of the United States Constitution.

The Pima County Democrats’ Twitter profile states that the group is involved in “[p]romoting Democratic values and policies.” The ad says to “Bring … your anger.”

You can do the math.

Richard Moorhead, The Western Journal
Audience Sounds Off After Bill Maher Floats Idea of Biden Ditching Harris: 'She's a Bad Politician'
Animal Rights Protester Storms Field During 'Monday Night Football,' Then a Pro Bowl Linebacker Makes Him Regret It
Noem Announces Plan That Would Make State History: We Will 'Protect Our People from a Disastrous White House'
Elon Musk Claims His Electric Truck Will Serve Briefly as a Boat - Gets Mercilessly Mocked
Lib Thinks He Has Everyone Fooled After Posting Photo of Biden and DeSantis, Then Twitter Calls Him Out
See more...