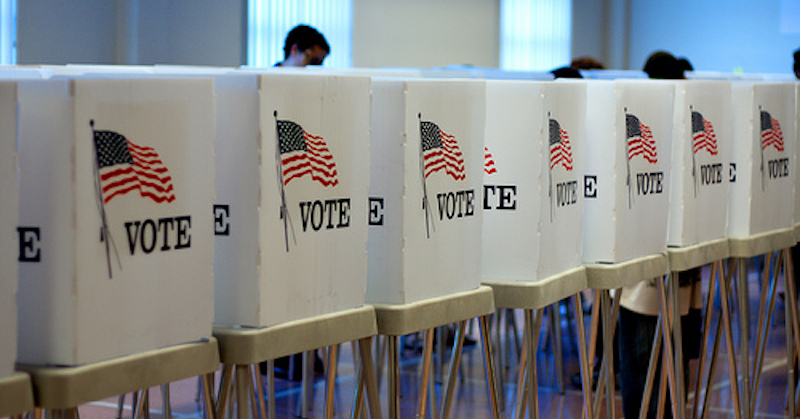 Leftist thugs in suburban Chicago have been caught paying people to vote for Democrats.

The Kankakee County Attorney’s office is investigating at least three cases of voter fraud where people were offered bribes for voting.

In addition, State’s Attorney Jamie Boyd said, “several” vote-by-mail applications have been mailed in from people who live outside the county, The Daily Journal is reporting.

“This unprecedented action was taken in response to reports of individuals from Chicago offering gifts to potential voters in exchange for a vote for Kate Cloonen, Hillary Clinton and others,” Boyd said in the news release. “Our office takes seriously the obligation to protect the rights of citizens to vote for the candidate of their choice, and to do so without undue influence from special interest groups. Democrat Kate Cloonen and union thugs are accused of trying to buy votes.

“The investigation will also focus on the authenticity of vote by mail requests. Several applications have been filed with the election authority that appear to be fraudulently executed.”

More amazingly, the voters who were bribed were actually being transported by van to the county clerk’s office to vote early.

Nobody has caught the perpetrators yet, but it’s pretty clear who is responsible:

Union thugs and their Democratic masters are working for Democrat Kate Cloonen in a highly contested race against local Republican attorney Lindsay Parkhurst.

“These reports of voter fraud in Kankakee are incredibly disturbing,” Pankhurst said. “Fair and honest elections are the bedrock of our democracy. It is truly deplorable when people try to corrupt our system in this manner.”

Of course Cloonen would not comment, but two union thugs would. Rather than deny the accusations, they tried to claim that voter disenfranchisement from Republicans is common, so – I guess – this makes their voter fraud okay?

“We know many legally registered voters have been turned away from voting over the last few days,” union reps Gary Ciaccio and Mike Smith said. “Since early voting for the 2016 General Election began just a few short days ago, there have been numerous reports and eyewitness accounts of harassment and intimidation by local government officials of residents trying to participate in the democratic process of voting.”

It is a felony to try to coerce or influence a voter and Boyd, a Republican, who lost his bid this year to become a judge, said that the clerk’s office will not being handing out “I voted” stickers in an effort to stem any vote-buying efforts.

Just another day in corrupt Illinois.