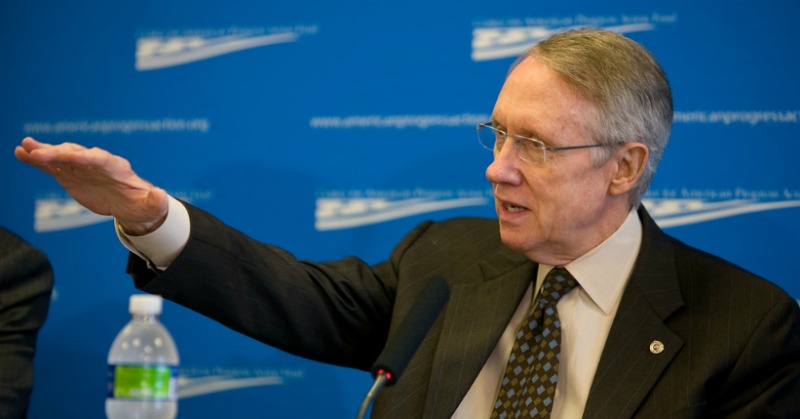 If you want a perfect example of how short-sighted and myopic the left truly is, look no further than the elderly Sen. Harry Reid.

This was in 2013 – the final year Democrats controlled the Senate. Certainly they must have known that the GOP would eventually regain control of the Senate – as they did a year later – and this rule change – this “nuclear option” would come back to haunt them.

The senate now has a 51-seat majority (likely 52, depending on the outcome of the Louisiana runoff), and can take advantage of Harry Reid’s rule change and give Donald Trump the cabinet positions he wants.

If they stay united, there’s literally nothing Democrats in the Senate can do about it.

Trump has nominated Republican Sen. Jeff Sessions of Alabama as Attorney General. Discredited Democratic National Committee Chairwoman Donna Brazile has called for the Senate to “reject” the appointment, but thanks to Harry Reid, that probably won’t happen.

Interestingly, Reid and his fellow Democrats claim they don’t regret this rule change in the slightest, The Daily Caller is reporting.

Sen. Reid’s spokeswoman Kristen Orthman told The Washington Post, “Sen. Reid has no regrets on invoking the nuclear option because of Republicans’ unprecedented obstruction.” She added, “If Republicans want to go on record supporting radicals, that’s their decision and they will have to live with it.”

Oregon Democrat Sen Jeff Merkley, who also supported the “nuclear option,” pretended he had no regret either.

Democrat Chuck Schumer, displaying a rare moment of level-headedness, told CNN he didn’t like the rule change. “I wanted 60 for Supreme Court and Cabinet, but I didn’t prevail.”

Back then, though, it was Republicans who were warning about changing the rules – that it would not be in the long-term interests of the Democrats.

“Democrats won’t be in power in perpetuity. This is a mistake — a big one for the long run. Maybe not for the short run. Short-term gains, but I think it changes the Senate tremendously in a bad way,” Alabama Sen. Richard Shelby said at the time.

So it looks like Donald Trump will get every cabinet position he wants, and there’s nothing Democrats in the Senate can do about it.

And they only have themselves to blame.

By the way, this “nuclear option” doesn’t apply to Supreme Court appointments. They still need a 60-vote majority.