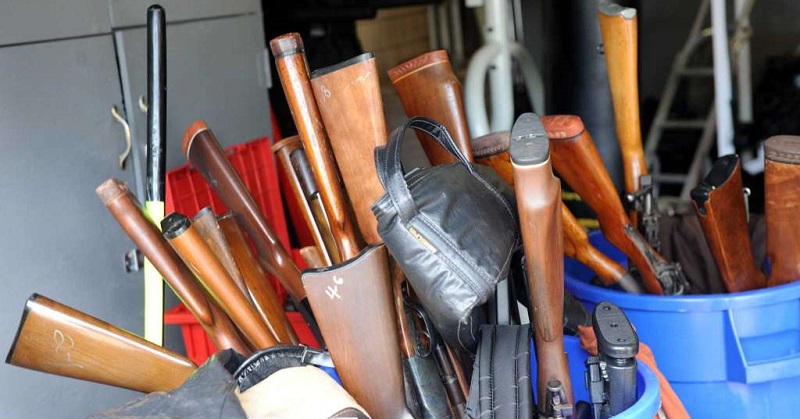 Stripping American citizens of Constitutional rights is no trivial matter.

We have a system – due process – and no fewer than two Amendments designed to protect Americans from having their rights stripped away before being brought before a court.

But in some states – liberal states like Connecticut, especially – there is no due process. It’s gone. Tyranny reigns.

Because Gov. Dannel Mallow is about to sign a law that strips accused domestic abusers of their Second Amendment right with no due process whatsoever.

it’s designed to remove guns from a man accused of violently beating his wife or girlfriends, but in reality, it’s a step towardthuggovernment, that tosses aside long-held notions of “innocent until proven guilty,”habeas corpus

Accused domestic abusers would have to surrender firearms within 24 hours under legislation that won final approval in the Senate on Monday afternoon and now heads to the governor for his expected signature.

The bill was approved 23-13 after a two-and-three-quarter hour debate, in which Republicans failed in three attempts to amend it. Gov. Dannel P. Malloy, who proposed the legislation, indicated right after the vote that he supports the bill, which would require alleged domestic abusers — in most cases, men — to immediately give up their guns and ammunition if their partners seek restraining orders.

The goal is to protect women from the increased lethality at a critical point in a relationship: when they are trying to leave their abusers. About 14 domestic homicides occur annually in Connecticut, half of which are caused by guns.

These people haven’t been convicted of anything. They’re “accused” domestic abusers. Since when do we strip people’s rights without being arrested or charged with a crime – merely by being “accused?”

Connecticut has the same process California is adopting, called “temporary restraining orders.” They permit courts and police to seize a person’s weapon for up to 14 days merely on the word of another person who claims they pose a danger to themselves or others.

This new law is intended to protect victims of domestic violence. But some level-headed lawmakers don’t see it that way.

Republican opponents of the bill said it would infringe on the constitutional rights of lawful gun owners who could have their weapons taken away without due process. One of the Republican amendments would have required the targets of temporary restraining order (TRO) to be served with the orders in person, rather than marshals having the option of leaving off the orders at the targets’ homes if they were not home.

While opposition against the legislation emerged during a daylong public hearing earlier this year, there was little evidence of gun-rights activists in the Capitol on Monday. Republican opponents kept the debate going for nearly three hours, though.