Joe Biden has to be the worst president in living memory. So bad he makes Jimmy Carter and Barack Obama look good by comparison.

The Democrat party has fallen far, from the pro-America pro-capitalism party of JFK to the America hating, pro-socialist party of Joe Biden, Bernie Sanders and AOC.

Here is the devolution of the Democrat party, from JFK to Joe Biden brutally summed up by a single meme: 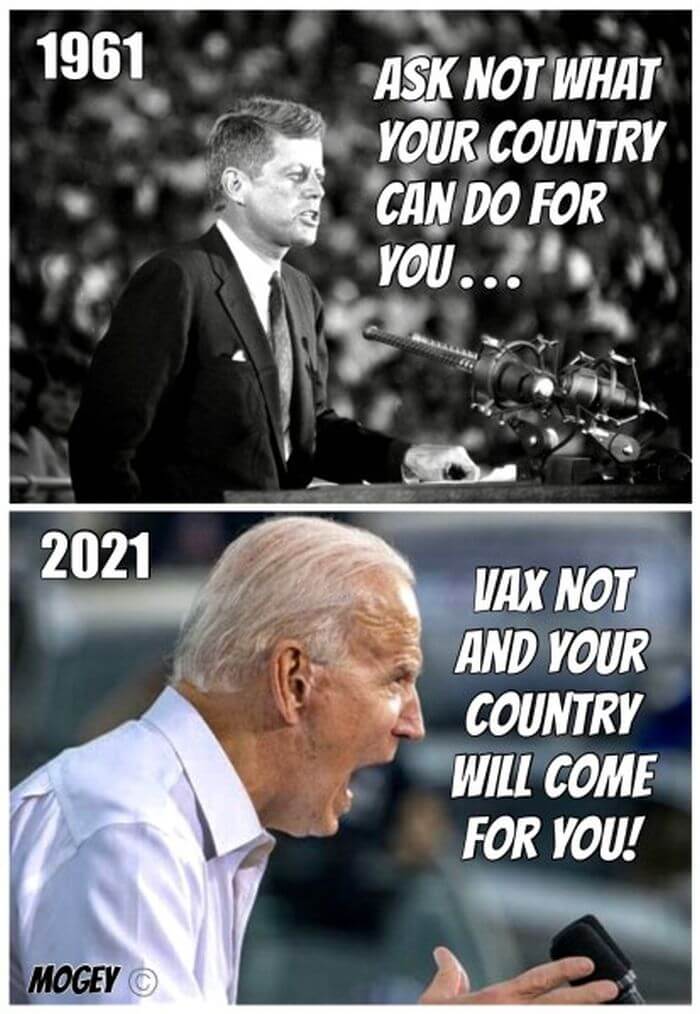 The sad truth is though, that what is actually happening in our country and the direction leftists are taking us is horrifying as the following story perfectly illustrates:

A judge in New York has denied a father visitation with this 3 year old daughter until he gets the covid shot, even though he has natural immunity from getting the disease earlier.

A New York City judge has barred a father from visiting his 3-year-old daughter unless he is vaccinated against COVID-19 or submits to weekly tests.

Justice Matthew Cooper ruled in the divorce hearing allowing the father to visit his daughter in person while unvaccinated is “not in the child’s best interests,” according to The New York Post. The father, who was unnamed in the court’s opinion, has already recovered from the COVID-19 virus.

“Here, in-person parental access by defendant is not in the child’s best interests, and there are exceptional circumstances that support its suspension,” Cooper wrote on October 7. “The dangers of voluntarily remaining unvaccinated during access with a child while the COVID-19 virus remains a threat to children’s health and safety cannot be understated.”

The father’s attorney, Lloyd Rosen, pushed back against the judge’s decision. Rosen defended his client’s skepticism of the COVID-19 vaccine while attacking Cooper’s reasoning as unscientific. The attorney pointed out that his client already has natural immunity to COVID-19 from his bout with the illness.

“My client is not a conspiracy theorist,” Rosen said. “He has concerns about the vaccine. He’s heard about side effects. He once had a bad reaction to a flu vaccine.”

Rosen also argued that the judge’s ruling was “absurd” and set an unrealistic precedent.

“This judge must feel that 80 million Americans who aren’t vaccinated are placing their children at imminent risk of harm and, therefore, the courts should intervene and remove those children from their parents,” Rosen said. “This is an absurd position to take.”

This is outrageous and this moronic judge should immediately resign and beg this father for forgiveness.

Of course we know what the odds are of that happening.