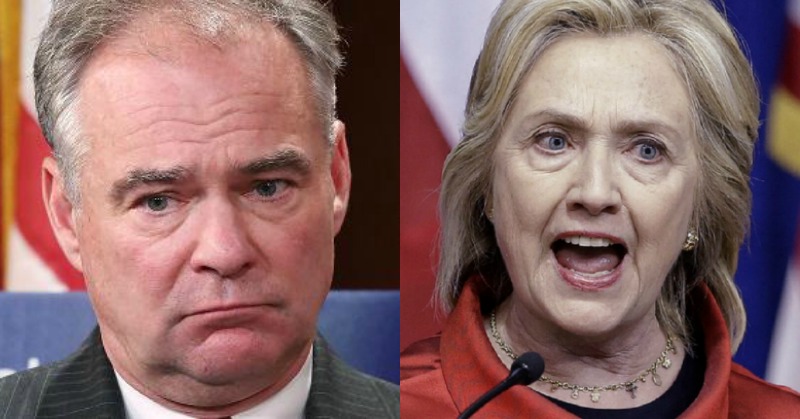 Democrat presidential nominee Hillary Clinton’s choice of running mate, Virginia Sen. Tim Kaine, has been a goldmine of gaffes so far, and it makes you wonder if he knows who he’s running with. Now his own words give even more suspicion of Clinton’s serious health issues.

Conservative Tribune reported that Kaine was campaigning in Erie, PA on Tuesday and as part of his speech, he called for more transparency from candidates including health records:

“You want to know if we’ll disclose our finances, so you can understand how we’ve managed our own household or business and see if we owe anybody anything.”

Kaine’s speech was full of these ironic statements given who he’s running with, and the next was a doozy:

“We want to make sure that candidates aren’t involved in any foreign entanglements that could impact our national security, and we want to know that they’re in good-enough health to perform their duties.”

Here’s the best line and the one likely to rankle the Clinton campaign the most, in which Kaine makes it clear that Clinton is not on the up-and-up based on his own words and her actions:

Well, that was quite a “do you realize what you’re saying?” moment.

We all know that Clinton is not on the “up-and-up,” but to have her vice presidential running-mate point it out is priceless.

Kaine basically laid out the conservative position here. If Clinton has nothing to hide about her health records and other nefarious ties, why not just release them?

Clearly Kaine was trying to attack GOP presidential nominee Donald Trump for not releasing his tax returns, i.e. the money he made as a private citizen, but it failed miserably by being far more applicable to Clinton than Trump.

Trump has explained numerous times that he is under audit by the IRS and that his lawyers advised him not to release his returns.

What’s Clinton’s excuse for not being transparent about her activities as a government employee or her refusal to release her health records amid mounting evidence of her failing health?