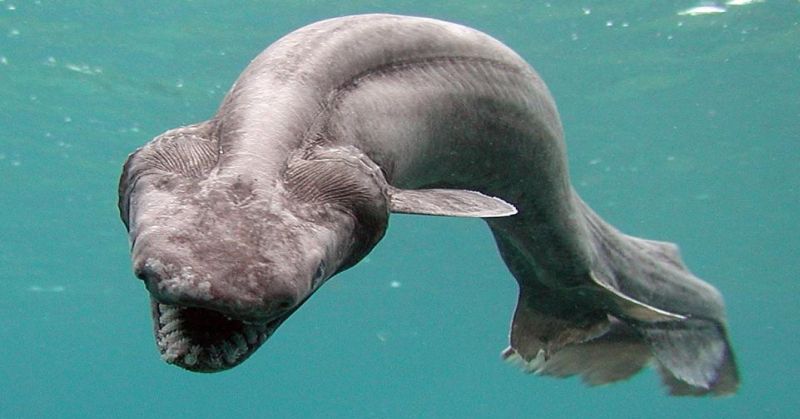 The rare frilled shark is considered a “living fossil,” as its makeup has remained unchanged for 80 million years. This week, researchers found one off the coast of Portugal, adding evidence regarding the resilience of this ancient sea creature.

The shark was found off the Algarve coast by researchers who were working on a European Union project in the area aboard a trawler, the BBC reported. The aim of the project was to “minimize unwanted catches in commercial fishing,” but the team unknowingly caught one of the rarest and most ancient animals on the planet.

The frilled shark has remained the same, both inside and out, since the time of the dinosaurs, with scientists dating it back to the Cretaceous Period, a time when the Tyrannosaurus Rex and Triceratops still roamed the planet. The creature is incredibly unevolved, most likely due to the lack of nutrients found in its deep-sea dwellings, a previous Japanese study on the shark suggested. The examination revealed that its diet is 61 percent cephalopods—the same class that squids and octopus belong to.

This deep sea dweller is usually found between 390 and 4,200 feet below the surface, which is why it’s rarely seen and wasn’t even discovered before the 19th century (despite being around long before humans). 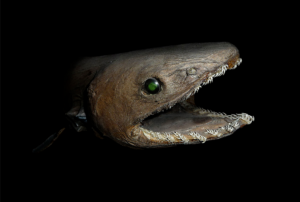 The shark caught this summer measured around five feet in length, but at their longest can be around six-and-a-half feet, IFL Science reported. The Japanese study on these rare sharks showed that they may also have the longest gestation period of any living creature, 42 months.

Its name may sound unfitting for a beast that swims the deep seas, according to Mental Floss, but the frilled shark is named after its gills. Pretty much all other sharks have separate gills, but the frilled shark’s first pair of gills stretch all the way across its throat. In total, the shark has six pairs of gills that have “frilly” edges. 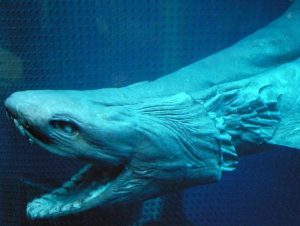 The shark also has a unique mouth shape. Its jaw has more than 300 teeth neatly lined in 25 rows, which, according to professor Margarida Castro of the University of the Algarve, are specifically designed to help it “to trap squid, fish and other sharks in sudden lunges,” The Portugal News reported. It’s lined with spines called dermal denticles, which, combined with the teeth, give the mouth an all around frightening look.

Samuel Garman, the first scientist to study the frilled shark, thought the monster of the deep’s snake-like movements may have inspired sailors’ stories of sea serpents. Scientists today think it’s likely they attack their prey the same way snakes do, by striking suddenly. But because there is very little footage of the shark, we do not know for sure.

As the researchers point out to reporters at Sic Noticias, a Portuguese TV channel, there is “little known in terms of its biology or environment”. While these spooky-looking fish can be found in locations across the Pacific and Atlantic oceans, they have a patchy range and prefer deeper waters. This means there is very little video footage of the sharks in their natural habitat and they are very rarely caught. When they are, it’s even rarer for them to be taken back to the laboratory to be studied.

It’s unlikely you will ever come face-to-face with a living frilled shark. But if you do, it’s safe to say: Keep as far away as you can, and whatever you do, try to avoid its ferociously awesome jaw.