Richard Pilger resigned from the DOJ after Attorney General William Barr sent out a memorandum yesterday instructing the former Director of the Election Crimes Branch to investigate claims of “post-voting election irregularities.”

In a memo sent by Pilger to his colleagues, he said that after “familiarizing” himself “with the new policy and its ramifications,” Pilger decided to “regretfully resign” from his role as Director of the Election Crimes Branch.

Pilger says although he “enjoyed very much” working with his colleagues at the DOJ, he claims he “must” resign after Attorney General Barr’s election investigation broke “the forty-year-old ‘Non-Interference Policy’ for ballot fraud investigations.” 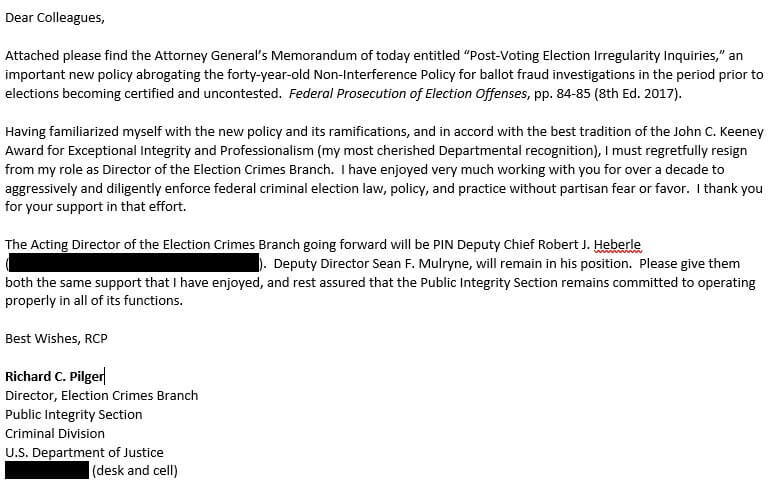 A resignation of this magnitude from a “non-political” branch of government would normally mean something. In this case, it does mean something but not in the way the mainstream media would like for you to believe.

Richard Pilger is not the ‘white knight’ he claims to be. Richard Pilger’s name should have sounded an alarm in your brain. Where have we heard that name before?

Richard Pilger is a career government guy who was deeply involved in the Lois Lerner IRS scandal. He allegedly colluded with Lois Lerner to target conservative organizations with the prosecution, according to the ACLJ (The American Center for Law and Justice).

The report by the ACLJ says that “communications between Lerner and Pilger shows ongoing collusion between the IRS, through Lerner, and the Obama DOJ to criminally prosecute the same types of groups.” They shared “sensitive taxpayer information” between the IRS, FBI, and the DOJ. All of this information is fully protected under the law and should not have been shared.

Forbes reported that ” a Lerner email from October 5, 2010, shows the IRS sent the FBI and DOJ a ‘1.1 million page database of information from 501(c)(4) tax-exempt organizations’ that contained confidential taxpayer information.”

This man was *allegedly* part of the IRS scandal where they targeted Republican and conservative people and organizations in a partisan and political way. The government is full of deep state “survivors” that fly under the radar until their moment to ruin Trump’s Presidency.

The man that colluded with Lois Lerner to prosecute Tea Party and conservatives for thinking differently than them. I am perfectly fine with this man leaving. Bye, Richard.

The left will try and tell you how Pilger is a principled man who doesn’t want to soil himself with investigating the irregularities. The left has always been good at laundering a Democrat operative’s image for the American public to consume.

Marmee Rooke
I have been around grassroots politics all of my life. Being a stay-at-home mom, I knew I had a voice that needed to be heard. I am raising the next generation while fighting for mine.
Texas AG: Americans, Texans Will Always Come First; 'When The Biden Admin Breaks The Law, I Take Action'
Trump's Administration Saves Ecuador From China's Debt Trap
Chris Wallace Is A Laughing Stock After Falling All Over Himself To Praise Biden's Inauguration
Donald Trump's Supporters Line Streets Of Mar-A-Lago To Welcome Him Home
More Than 115 House Republicans Support Removing Liz Cheney As House GOP Chair
See more...