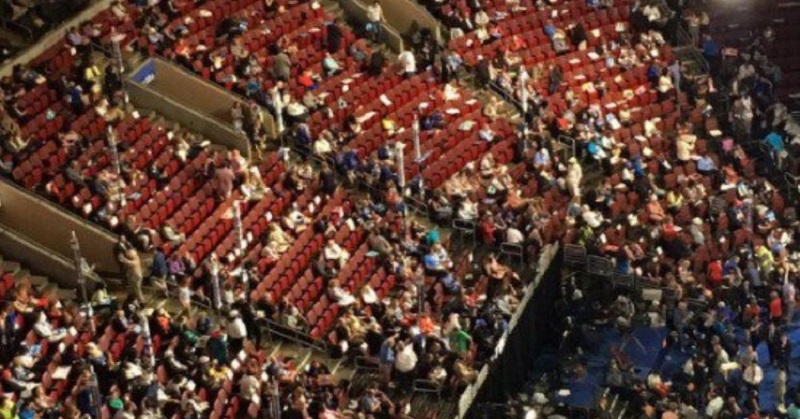 The mainstream media will try to convince you that the Dems are coming together and singing Kumbaya after leaked emails prove the Democratic National Committee rigged the primary elections.

This is a lie.

Footage of the convention floor shows Sanders supporters weeping and outraged as they heckled the convention speakers and chanted ‘Lock her up.’ DNC securitytook Bernie signs away

from women and tore them up.

Hundreds of Sanders’ supporters and delegates stormed out of the out at the convention Tuesday night after Hillary received her party’s nomination.

The Democratic convention hall is nearly as empty as their nominee’s heart. The DNC is in damage control mode.

Democrats placed ads on Tuesday night offering “Actors” $50 a day to attend the rest of the convention to “cheer” and “wear promotional material.”

#DemsInPhilly 700 ACTORS NEEDED to fill empty seats remaining of the CONVENTION. BTW, $50 a nite is an insult ??? pic.twitter.com/nTICtnaH1n

The ads have since beendeleted.

Just imagine if the RNC did such a thing.

You won’t hear about this on the mainstream media, which rushed up close and personal to cover the “Never Trumpers” when they were revolting at the Republican Convention.

If this is a joke, the fact of a half empty hall made it easy to pull off.

Hillary’s making history all right, how many times in the history of national political conventions has the winner spoke to a half empty hall?