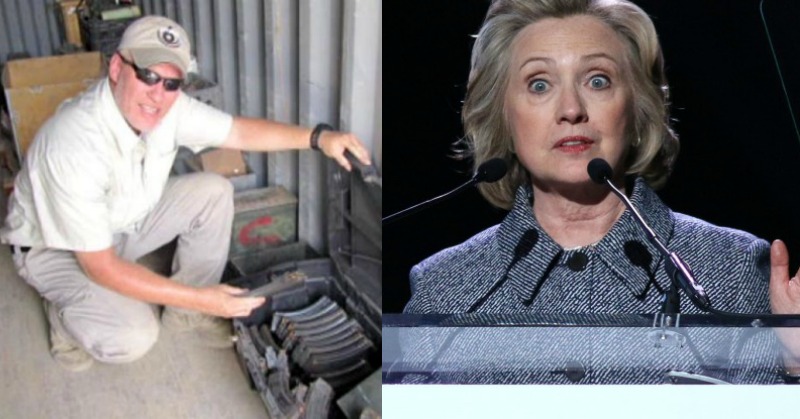 The Department of Justice has moved to drop the charges filed against Marc Turi, who was alleged to have sold arms that were intended for Libyan rebels. The likely reason why is that he threatened to expose former Secretary of State Hillary Clinton’s actions leading up to the Sept. 11, 2012 Benghazi, Libya terror attacks.

Turi was indicted in 2014 on four felony counts: two of arms dealing in violation of the Arms Export Control Act and two of lying to the State Department in official applications. The charges accused Turi of claiming that the weapons involved were destined for Qatar and the United Arab Emirates, when the arms were actually intended to reach Libya.

Turi’s lawyers argued that the shipments were part of a U.S. government-authorized effort to arm Libyan rebels.

It’s unclear if any of the weapons made it to Libya, and there’s no evidence linking weapons provided by the U.S. government to the Benghazi attacks.

Yeah, that evidence is probably swimming around with Clinton’s yoga schedules…

It has been surmised that the move to drop the charges is an effort to protect Clinton from having information revealed that may point to a role in the Sept. 11, 2012 Benghazi, Libya terrorist attacks that left four Americans dead.

Government relations and consulting firm SPG’s Robert Stryk advised Turi and had this to say about the case and its connection to Benghazi: “The U.S. government spent millions of dollars, went all over the world to bankrupt him, and destroyed his life — all to protect Hillary Clinton’s crimes.”

Perkins Coie partner Jean-Jacques Cabou served as Turi’s court-appointed defense counsel and said, in response to the dropped charges: “Our position from the outset has been that this case never should have been brought and we’re glad it’s over.” Cabou added, “Mr Turi didn’t break the law. We’re very glad the charges are being dismissed.”

The deal that Turi received did not require him to admit guilt; however, he will have to cease U.S. regulated arms dealings for four years in order for a $200,000 civil penalty to be waived.

In a 2015 court hearing, Cabou spoke about emails between Clinton and staffers that, he claimed, point to her involvement, according to a transcript:

We’re entitled to tell the jury, ladies and gentlemen of the jury, the Secretary of State and her highest staff members were actively contemplating providing exactly the type of military assistance that Mr. Turi is here to answer for.

If we armed the rebels, as publicly reported in many, many sources and as we strongly believe happened and as we believe at least one witness told the grand jury, then documents about that process relate to that effort.

But, according to Democrats, Republicans were crazy when they pushed for the emails, not just because Clinton mishandled classified information (which is bad enough), but because she likely did so specifically to obfuscate.

Initially, Clinton likely had the server set up to hide the pay-to-play activities conducted during her tenure as secretary of state, but it had the added bonus of enabling her to hide her inevitable failures in the role — which was likely evidenced in her responsibility for the Benghazi terror attacks.