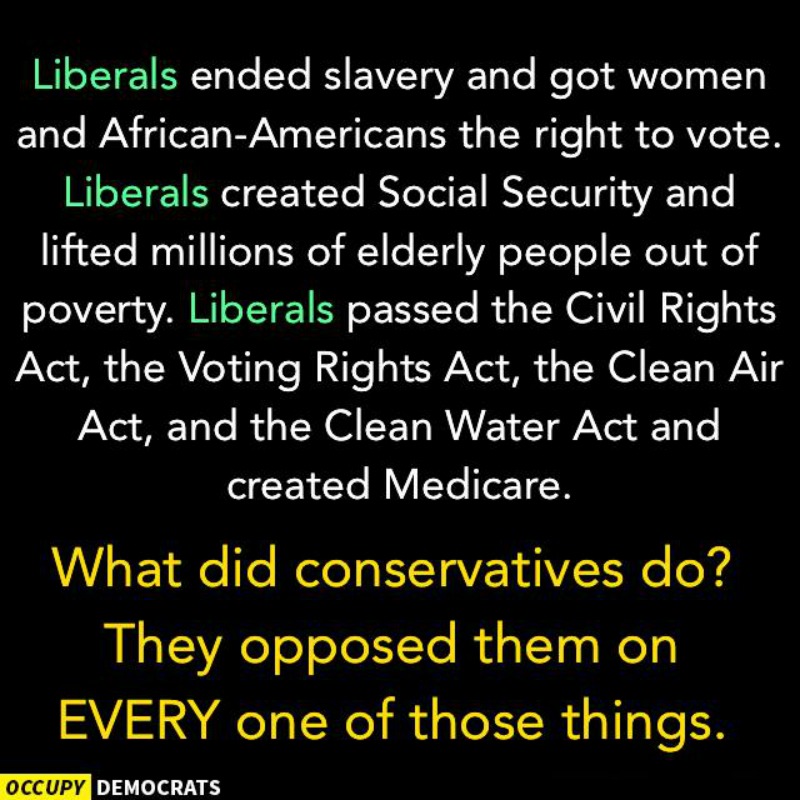 Once again we have another left wing lunatic meme that is completely devoid of facts. Are they THAT embarrassed by their own party that they simply cannot tell the truth?

It was the Republican Party who pushed for Civil Rights to be passed for decades with Democrats filibustering the vote even as late as 1964.

It was Republicans who fought for blacks and women to have the right to vote. Democrats didn’t want EITHER to vote because they were afraid they would vote for Republicans (they were right).

Though both the Civil Rights Act of 1964 and the Voting Rights Act of 1965 were signed into law under Democrat President, Lyndon Johnson, it was the Republicans in Congress who made it possible in both cases – not to overlook the fact that the heart of both bills came from the work of Republican President Dwight D. Eisenhower.

In the 108th Congress, when Republicans proposed a permanent extension of the 1965 Voting Rights Act, it was opposed by the Congressional Black Caucus (composed only of Democrats).

The Clean Air Act was originally put into place by Republican President Dwight D. Eisenhower. This legislation was to study air pollution.

What Democrats have put into place following that over the years has been to kill jobs, the economy and lie to get funding for Al Gore’s Global Warming hoax. They have gotten completely out of control to the detriment of society, not the benefit.

The Clean Water Act was originally put into place by Democrat President Harry S. Truman and then re-invigorated with more regulations by Republican PresidentRichard M. Nixon.

Medicare was indeed passed by a majority of Democrats. Who else would want a massive, unaffordable, unsustainable government-run program? That’s not anything to be proud of.

As usual, Democrats are ashamed of their own history or they intentionally lie about it because it’s that bad rather than admit the truth.

It says a lot about an organization that chooses to lie rather than admit past failures.  They most likely lie because they still behave the same way today only they call it ‘government help.’