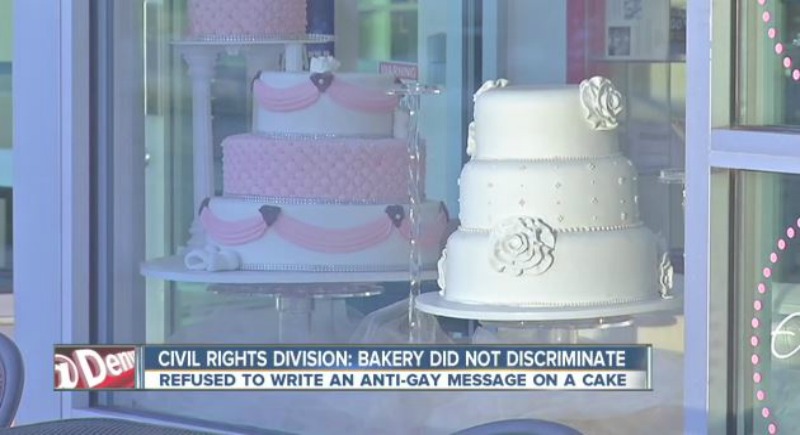 Apparently the Colorado Civil Rights Division has been smoking a bit too much of the legalized week in their state.

Last week the CCRD decided that it wasn’t discrimination when a gay baker refused to bake a cake with an anti-gay message.

From The Denver Channel:

The dispute began March 13, 2014 when Jack went to the bakery at 1886 S. Broadway and requested two cakes shaped like bibles. He asked that one cake have the image of two groomsmen holding hands in front of a cross with a red “X” over them. He asked that the cake be decorated with the biblical verses, “God hates sin. Psalm 45:7” and “Homosexuality is a detestable sin. Leviticus 18:2”, according to the Civil Rights Divisions’ decision.

On the second bible-shaped cake, Jack also requested the image of the two groomsmen with the red “X”. He wanted it decorated with the words “God loves sinners” and “While we were yet sinners Christ died for us. Romans 5:8.”

He told the civil rights agency he ordered the cakes with the imagery and biblical verses to convey that same-sex marriage is, in his words, “un-biblical and inappropriate.”

Marjorie Silva, the owner of the bakery, told Jack that she would make him the bible-shaped cakes, but would not decorate them with the biblical verses and the image of the groomsmen that he requested. Instead, she offered to provide him with icing and a pastry bag so he could write or draw whatever messages he wished on the cakes. 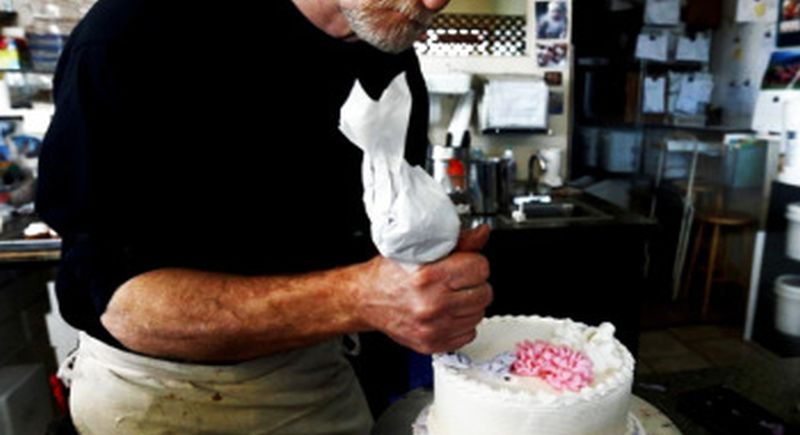 However last year, the same civil rights division ruled that a bakery in Lakewood could not refuse to make a wedding cake for a gay couple.

“Being denied service by Masterpiece Cakeshop was offensive and dehumanizing especially in the midst of arranging what should be a joyful family celebration,” said Mullins. “No one should fear being turned away from a public business because of who they are. We are grateful to have the support of our community and our state, and we hope that today’s decision will help ensure that no one else will experience this kind of discrimination again in Colorado.”

“Masterpiece Cakeshop has willfully and repeatedly considered itself above the law when it comes to discriminating against customers, and the state has rightly determined otherwise,” said Sara R. Neel, staff attorney with the ACLU of Colorado. “It’s important for all Coloradans to be treated fairly by every business that is open to the public – that’s good for business and good for the community.”

So in Colorado, a gay baker can refuse to make a cake with an anti-gay message they find offensive but if you are a baker who has religious beliefs against gay marriage, you are forced to bake a gay wedding cake.

Both of these rulings are making the statement that gays have more individual rights than those with religious beliefs against gay marriage.

This ‘civil rights’ division has argued against itself by claiming the gay baker can’t be offended but a religious baker can be.

Again, it boils down to individual freedom and again the Colorado Civil Rights Division gets it wrong. Neither bake shop should have to bake a cake against their will. Period.