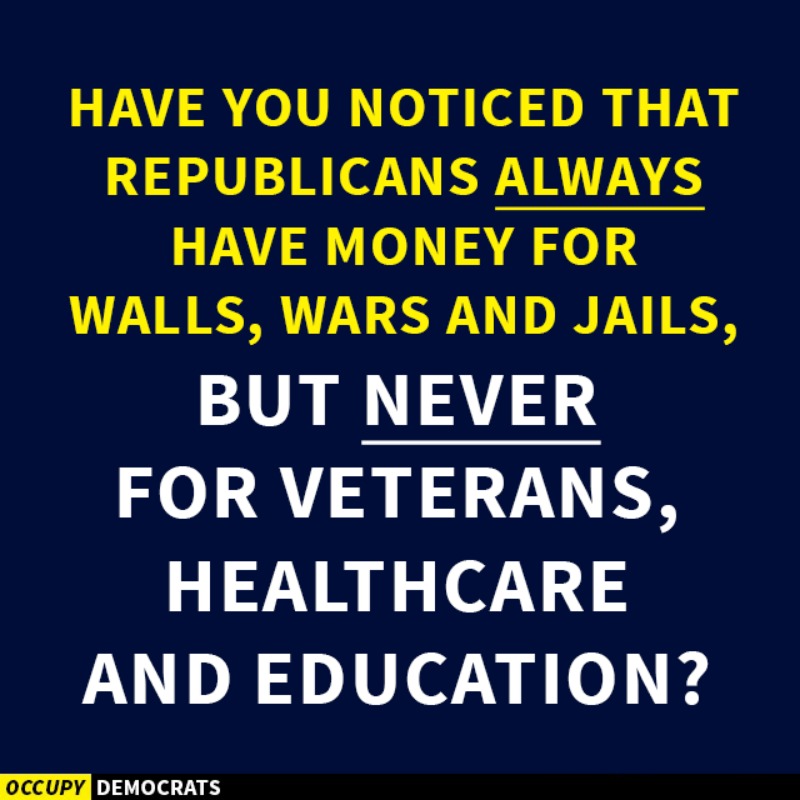 The Occupy Democrats group is at it again, with another ridiculous meme that reads: “Have you noticed that Republicans always have money for walls, wars and jails, but never for veterans, healthcare and education?” One thing the left never notices: facts.

Let’s start with veterans. How were veterans treated the past eight years under former President Barack Obama? How about the veterans who died waiting in line for healthcare on his watch? You know, the administration that senior adviser Valerie Jarrett claimed was unblemished by scandal.

Now on to healthcare. Under Obamacare, premiums are skyrocketing, many Americans can’t even use their healthcare because the deductible is too high, costs are out of control, etc. etc.

The Obama administration pumped more than $7 billion into an education program, first authorized under President George W. Bush, that had no impact on student achievement – according to a report released by the Department of Education in the final days of the 44th president’s term.

The Department of Education’s findings were contained in its “School Improvement Grants: Implementation and Effectiveness” report. The study could energize the debate over national education policy just as the Senate considers President Trump’s controversial pick to lead the department, Betsy DeVos, an outspoken school choice advocate who has questioned the way federal education dollars are spent.

That’s just skimming the surface and frankly only touches on recent years under the Obama administration. We’ve had many years to see how Democrat policies have ruined many American cities and kept them down.

Republicans have their own problems, there’s no doubt about that, but perhaps the Democrats should take the log out of their own eye first.