It’s bad enough that Equifax, one of the nation’s largest credit bureaus, let a hack of 143 million Americans happen right under their noses, but it is compounded by the fact that their top executives likely committed illegal insider trading, and now the fact that the company was sending people to a fake site to check if their information was affected by the breach.

Yes, that is actually happening, and we have screenshots of their social media sending people to the fake site. If you have checked your information with Equifax recently, you need to know about this.

Gizmodo reports that the credit bureau announced the creation of the site equifaxsecurity2017.com, a domain where anyone with a credit history can check to see if their information was affected. I did this myself, and luckily was not affected. Though at this point, I’m even skeptical of that report…

However, the issue here is that the domain name is long and easily falsified to appear real. And that’s exactly what happened. It was so bad that even company employees fell for it.

For nearly two weeks, the company’s official Twitter account has been directing users to a fake lookalike website, the sole purpose of which is to expose Equifax’s reckless response to the breach.

After announcing the breach, Equifax directed its customers to equifaxsecurity2017.com, a website where they can enroll in identity theft protection services and find updates about how Equifax is handing the “cybersecurity incident.”

But the decision to create “equifaxsecurity2017” in the first place was monumentally stupid. The URL is long and it doesn’t look very official—that means it’s going to be very easy to emulate. Fake versions of the site could be used to phish Equifax customers and steal their personal information, again. A much safer choice would have been to create a subdomain on the Equifax website (equifax.com) and direct users there.

To show just how vulnerable to scams this site is, developer Nick Sweeting created a domain with a name close to Equifax’s, securityequifax2017.com.

However, someone at Equifax was duped by the fake domain name, and has been sending people to that domain to check their information. 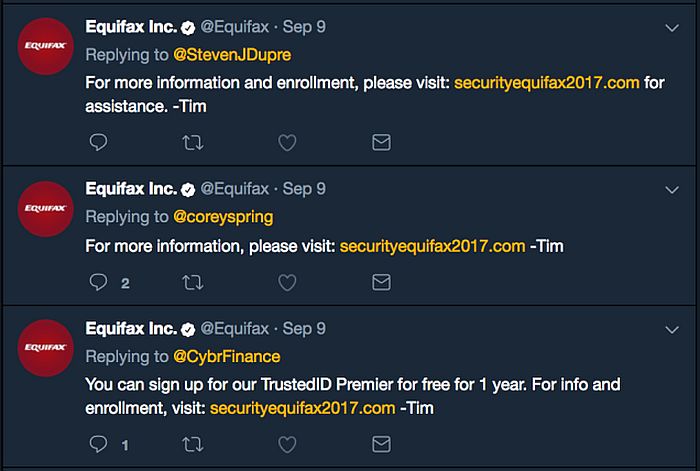 “It’s in everyone’s interest to get Equifax to change this site to a reputable domain,” Sweeting told Gizmodo. “I knew it would only cost me $10 to set up a site that would get people to notice, so I just did it.”

The real Equifax site is dangerous, he said, because of how easy it is to impersonate. “It only took me 20 minutes to build my clone. I can guarantee there are real malicious phishing versions already out there.”

This is a seriously disconcerting situation. People’s personal financial information is not some game to be taken lightly. The credit bureau should be as thorough and meticulous with their data handling as any entity on this planet.

Especially given that there is no way to “opt out” of credit reporting, keeping your financial history private, even better care must be taken. Either that, or we should be able to have more control over who takes our information.

But alas! We live in the 21st century where massive companies hold your information, allow data breaches, and send consumers to fake websites! You literally cannot make this stuff up.