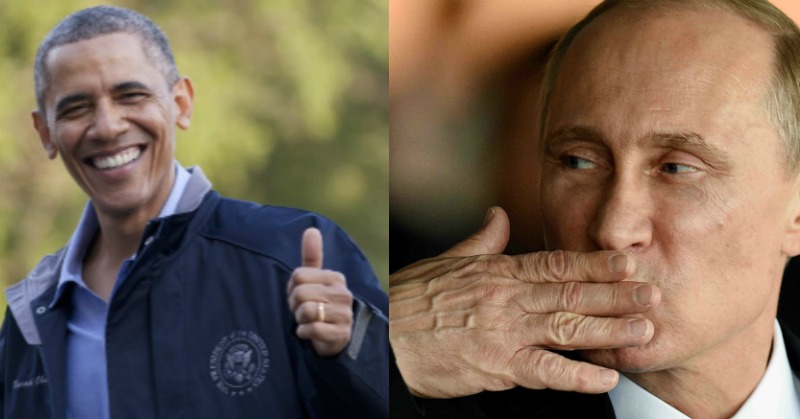 The number of ways and places Vladimir Putin is out-foxing, out-maneuvering, and thoroughly out-“leadershipping” President Obama are becoming too numerable to count. Some are plain to see, others more clandestine.

Of the more clandestine variety? The Russian President has steadily been building his dominance in the northern hemisphere’s most resource-rich region, the Arctic Circle, and has been running circles around his American counterpart in the process.

We’ve now learned that Putin has poised Russia to have a long-term strategic advantage in the Arctic region that it may never lose, prompting the UK Sunday Express to query, “Is Russia Set to Spark WW3?” Putin and Russia have nearly completed construction on an absolutely massive Arctic military base located just 300 miles from the United States!

On the 80th parallel on an island called Alexandra Land, which is located between the Barents and Kara seas, Russia has built a gigantic base that they are calling the “Arctic Trefoil.” With 14,000 square meters of space it can house 150 soldiers for up to 18 months. That’s ….large. So much space will allow troops to move freely without stepping outside into weather which can reach deadly cold temperatures.

Putin has already led an aggressive expansion of his fleet of Polar-class heavy ice-breaker ships in the Arctic region. Russia now has 41 such ships, 6 of them nuclear powered, compared to Obama’s America with our paltry fleet of two (one functional), and no money budgeted for the construction of any more. And now this.

The unveiling of this new Arctic base shows how much emphasis Russia is putting on gaining more control of the Arctic, which contains valuable minerals, crude oil, and a bevy of other precious natural resources. Putin reportedly deployed an air contingent to the region in 2014 when only a small border outpost existed. That contingent got to work expanding runways to enable cargo planes to land and deliver building materials.

And build they have.

Russia’s Defense Minister, Sergey Shoigu, delivered the news that the nation has built this giant military base. Moscow also revealed blueprints for a new army base on the disputed Kurile Islands, some of which are situated less than 20 miles from Japan. Russia is clearly building up its Arctic military infrastructure.

With this new base plus the opening of a similar  base (the “Northern Shamrock” on Kotelny island in the East Siberian Sea) plus talks of others, building of an Arctic fleet, incursion into the Syrian conflict, the Crimean peninsula invaded, owned, and annexed; and verification of war games taking place across the Arctic, it’s clear Putin means business.

Experts from the Express UK:

“Vladimir Putin’s imperialist ambitions were laid bare today with an announcement that the secretive Russian war machine is planning to build three new military bases in the Arctic – just 300 miles from the US mainland.

This is a really large base that was never seen during the Soviet times, and it has modern equipment, all of the needed equipment for these boundaries.
Russian Defence Minister Sergei Shoigu

But, in a significant ramping up of Russia’s military reach, Mr Putin hopes to taunt US and Japanese officials with outposts in the Arctic and Pacific.

Moscow also revealed blueprints for a new army base on the disputed Kurile islands – some of which are situated less than 20 miles from Japan.  The plans mean Moscow will have troops, warplanes and military vehicles stationed in all four corners of the Asian continent.

It will be seen by both Washington and Beijing as a direct challenge to military supremacy in the region.
In the Pacific, a new Russian base on the Kurile islands is likely to worsen already frayed relations with Tokyo…”

What counter moves does the U.S. have in place so as to not completely lose control of the Arctic and have a megalomaniac parking war planes, ships, and bombs just a few hundred miles from our front door, and are our plans any more clear and executable with defined methods and goals than our middle-east foreign policy?

Just as the weak can sense strength, the strong can detect weakness. And right now Putin is making it clear to the entire world just exactly who is strong and who is weak.