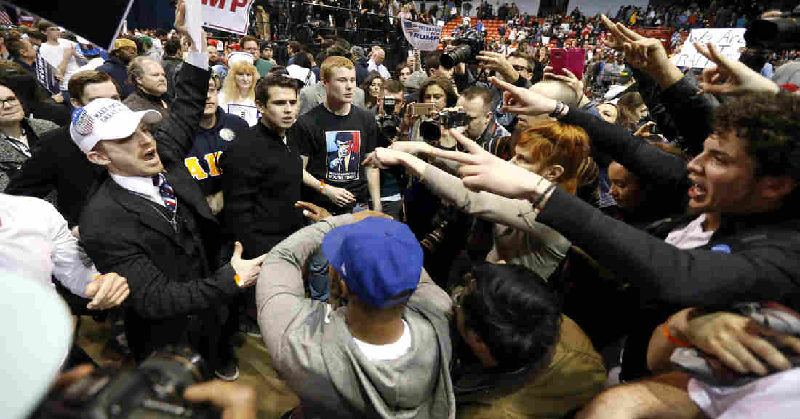 It was a mob scene last Friday when leftist protesters shut down a Trump rally in Chicago.

The protests were much more violent than reported, with the majority of the violence being against Trump’s supporters.

All canceled the event did was allow for a flood of Trump fans to enter the streets and clash with those who shut them down. What would possibly go wrong?

Aside from the fights that broke out, protesters ran through parking lots destroying the windows of any cars that had Trump stickers on them. Protesters also blocked ambulances, though I’m not sure how that is supposed to stick it to “the man.”

These are the same leftists we never stop hearing whine about money corrupting politics, but as Newsbusters reports, if money is an issue, they’re part of the problem.

The protest was organized by University of Illinois students, and supported by local labor organizations, Black Lives Matter, and MoveOn.org (which endorsed Democratic candidate Bernie Sanders), the Los Angeles Times reported. Soros has given at least $33 million to Black Lives Matter, and $1.46 million to MoveOn.org, but in the nearly 84 minutes of coverage since the event, the networks haven’t mentioned a dime.

And here’s the real kicker:

I’ll have to ask my progressive friends: how does it feel being funded by an old white man?