CNN’s John Berman claimed on “New Day” Thursday morning that the 2018 midterm elections “will be the most expensive in history.”

More than $4.8 billion has been spent on the 2018 elections, the most of any midterm cycle. That figure is projected to exceed $5.2 billion by the end of the election cycle.

The nonpartisan Center for Responsive Politics (CRP) tracks the money raised and spent in elections, and according to their most recent calculations, more than $4.8 billion has already been spent in 2018. No other midterm cycle has cost more than $4.2 billion when adjusted for inflation, according to CRP’s website OpenSecrets.org.

CRP estimates that by the conclusion of the 2018 midterm elections, more than $5.2 billion will have been spent, marking a 35 percent nominal increase from the $3.8 billion spent in 2014. These totals include spending from political parties, candidates and political groups such as nonprofits, political action committees (PAC) and super PACs. 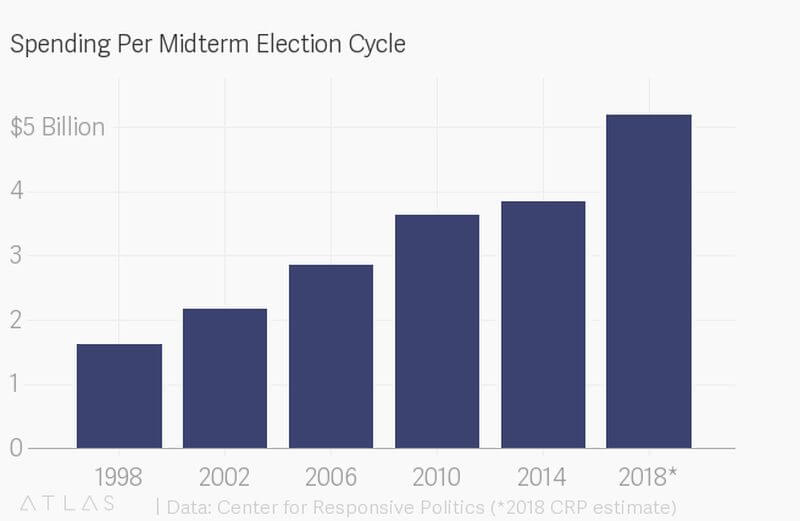 “The significance of this election is clear. But whether it’s a blue wave or a red wave, one thing is certain: A wave of money is surging toward Election Day, much of it coming from the wealthiest donors targeting this year’s most competitive races,” Sheila Krumholz, executive director of CRP, said in a news bulletin.

Some of the wealthiest donors include business magnate Sheldon Adelson and his wife Miriam, who have spent over $113 million for Republican candidates, and billionaire activist Tom Steyer, who has contributed nearly $51 million in support of Democratic candidates.

Democrats are on pace to outspend Republicans in a midterm cycle for the first time in at least two decades, partially due to small donors and an influx of out-of-state donations. CRP projects that by the end of the election cycle, Democrats will have spent $2.5 billion on congressional races, 44 percent more than 2014. Republicans are expected to spend $2.2 billion, or 21 percent more than 2014.