“Free speech zones” have been popping up all across the United States’ college campuses, but such zones are being set up at other venues as well, and you should know what to look for when you see these kinds of things.

A member of The Federalist Papers Project’s audience reached out to me and told me that a county fair in Arapahoe County, Colorado set up “free speech zones” outside of the event. The fairgrounds are in Aurora, Colorado.

The fenced-in area is about 12′ x 12′ and is right before the entrance to the fairgrounds. He sent me the following image: 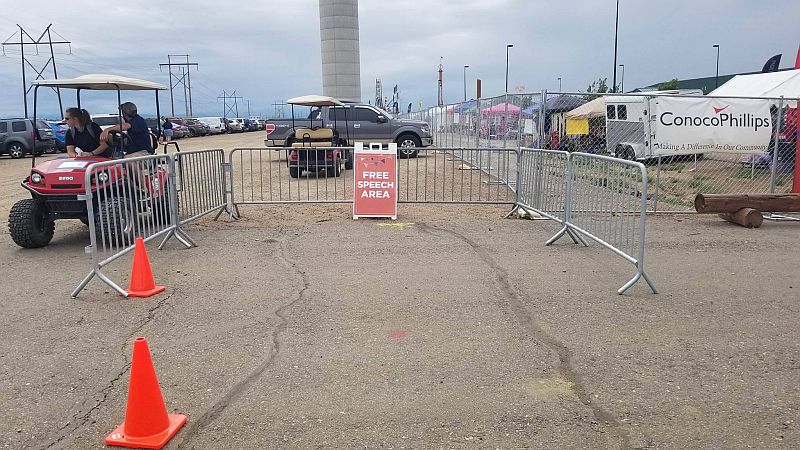 He informed me that the fairgrounds are directly adjacent to the sheriff’s office as well; from the information which I have gathered both from the fair’s website, and from the employees, this fair takes place on government-owned property and is sponsored by the county.

I reached out to the Arapahoe County Fairgrounds and Park department to ask about this “free speech zone.” In the initial discussion, held with media officer Amanda Slates, she told me about the rationale behind the zone:

The zone is set up so that people can voice their message. They are not allowed to pass out pamphlets or solicit conversation with patrons of the county fair inside the fairgrounds, from what I gathered. However, one may purchase a booth and interact with patrons from that booth (after paying their way in).

A booth for either a political cause, or religious cause, would have a fee of $300 for a standard 10′ x 10′ tent. The fair can limit the number of each type of tent, but only because of limited space.

My source sent me this photo of one of the booths inside the fair: 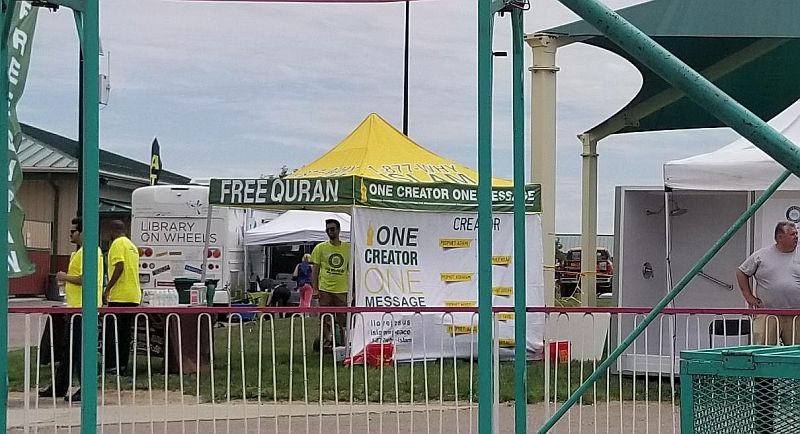 Slates mentioned that the county does not want patrons to be “harassed” by others who are out and about giving pamphlets and proselytizing attendees; essentially, an issue of keeping order. I pressed further on the issue, and got into contact with Spokeswoman Tiffany Blue to go into further detail about this “free speech zone.”

She told me that because the fair is considered to be a limited public forum, the county can take measures to restrict the time, place, and manner of the speech, but not the content. Hence, while one could not enter and start handing out pamphlets to event attendees, one could buy a booth.

I further asked if a person or a small group of people were having a discussion about either political or religious issues if that would be reason for dismissal. The county told me that would not be the case, unless that interaction was disrupting the order of the fair. Additionally, it would not be enforced on the basis of content, which would be a blatant violation of the First Amendment.

This kind of policy is one that many fairs have, so this is not a first. And while seeing a “free speech zone” designated area is something that may stir up the feeling that there is an infringement of the right to free speech, the Supreme Court has held that in these kinds of venues, such smaller and content neutral rules can be put into place.

While this kind of issue is one that appears to be a big violation of the free speech clause, my investigation has shown me that such is not necessarily the case. The intent of this fair’s rules is to keep good order and prevent rowdy disruption. Normal conversation is okay, but larger organized projects would have to be cleared first for the sake of space and order.

The real issue with “free speech zones,” the front where we really need to fight, is on college campuses. Big universities have been cracking down on speech that they do not like, and are trying to force those students into places that are out of the way to hinder their messaging.

So this kind of situation is one that is more common and not as egregious as what is happening on college campuses. These kind of time, place, and manner restrictions are fairly settled law, and appear to be with us to stay. These municipalities are in the legal clear, as long as the enforcement of such is absolutely content-neutral.

As soon as one’s speech is burdened because of its content, then there is a real problem (like what is happening on college campuses).