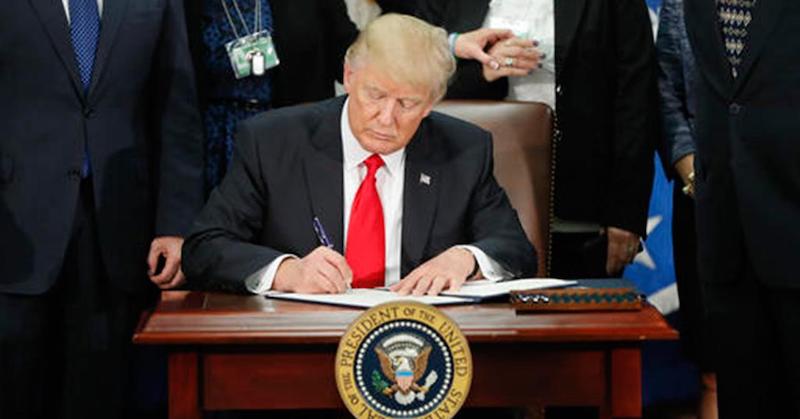 Whether or not the executive order is a good idea is up for debate, but not when the facts are twisted into a pretzel and the public is deceived.

You can read the entire Executive Order here, and you’ll be one step ahead of most of the rest of the media.

The media are calling it a “Muslim Ban,” and their headlines scream how incredibly awful it is.

And even Bloomberg jumped in on the action:

The media is following a narrative they have created that Donald Trump is a racist Islamophobe and they are fashioning every story to fit that narrative.

Leftists on Capitol Hill are more than willing to play along, too:

Chuck Schumer of Trump's 'extreme vetting' Exec. Order: "Tears are running down the cheeks of the Statue of Liberty tonight." pic.twitter.com/ONz3Ss6BJ5

Tears running down the cheeks of the Statue of Liberty … give me a break.

What a bunch of nonsense.

And, not to be outdone, the Huffington Post ran a nonsense headline reading “Trump bans 134,000,000 from the U.S.” with a picture of Lady Liberty upside down. 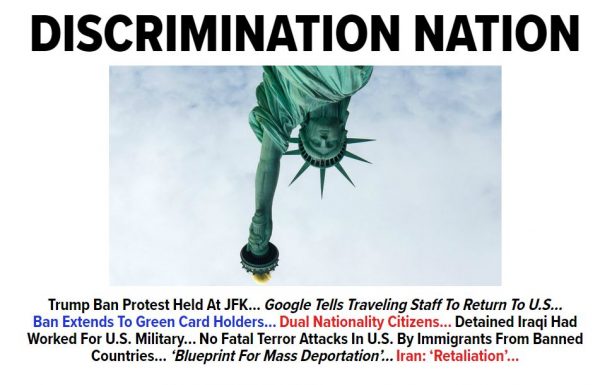 So what’s the truth? Well, Donald Trump did make a quasi-promise to ban Muslim immigration from the United States. But he didn’t do that. His executive order is a temporary restriction on people coming in from known jihadi conflict zones. That’s it.

So what specifically does it do?

Is that the “evil discrimination” the media wants us to believe? No. Fake News.

Then, it imposes a temporary, 90-day ban on people entering the country from seven countries that Barack Obama and Congress have identified as the top producers of terrorism. And only those seven countries. They are Iran, Iraq, Syria, Libya, Somalia, Sudan and Yemen.

The media’s narrative that Trump excluded countries that he has business interests in is absolute garbage, and they know it. More fake news.

Then, they claim that the ban is being applied to all “green card holders.” Yes, some people with green cards were temporarily detained and that was wrong. But the wording of the executive order specifically doesn’t apply to legal, permanent resident of the U.S. Green-card holders have been very thoroughly vetted already. More Fake News.

Finally, the executive order puts an “indefinite hold” on the admission of refugees from Syria “until such time as I have determined that sufficient changes have been made to the USRAP to ensure that admission of Syrian refugees is consistent with the national interest.”

Sounds awful, doesn’t it. Except it’s nothing. While the Syrian war was raging from 2011 to 2014, Barack Obama admitted in a total of 201 refugees. The number rose to 1,682, but only in the last year of his administration did Obama start letting in refugees in numbers that were remotely relevant.

As “Never-Trumper” David French in National Review put it: “While the Syrian Civil War was raging, ISIS was rising, and refugees were swamping Syria’s neighbors and surging into Europe, the Obama administration let in less than a trickle of refugees. Only in the closing days of his administration did President Obama reverse course — in numbers insufficient to make a dent in the overall crisis, by the way — and now the Democrats have the audacity to tweet out pictures of bleeding Syrian children?”

Finally, there is much media hype that Trump is giving priority to Christian refugees over Muslim ones.

Interestingly, during the Obama Administration, less than one half of one percent of the Syrian refugees admitted were Christians. And Yazidi Christians are some of the most persecuted people in the country. Christians represent 10 percent of Syria’s population.

CNN thinks this preference for Christians now is just awful:

There is no basis to the claim Muslim refugees were prioritized over Christians. Fact is, refugee policy not based in religion, until now.

That’s plain wrong. Religious considerations are a part of refugee policy by law. Giving preference to certain religious groups – especially ones being singled out for persecution is not only legal, it’s good policy.