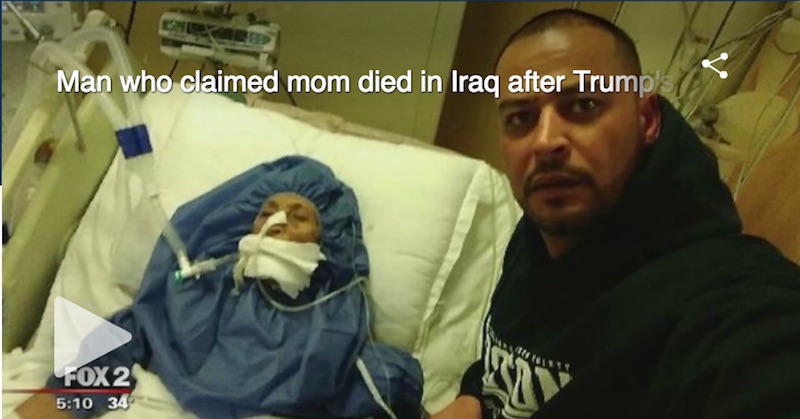 He and his mom were waiting to come home from a visit to Iraq, but they were banned from returning by Donald Trump’s “Immigration Ban.” Hager’s mom was sick and died before they could make it back to the United States.

Except it’s all fake. Fake news.

Mike Hager was lying. His mom, died five days before the travel “ban” went into effect.

The story first aired on Fox 2 in Detroit and was posted on Fox2Detroit.com. They later changed the story to reflect Hager’s lie.

Here’s how the story original put it:

Mike Hager fled Iraq with his family during the Gulf War, returned during the Iraq war and worked alongside United States Marines and Army forces. He now owns a business in Metro Detroit and said his mom would still be alive today if President Donald Trump had not instituted his travel ban on Muslim countries.

Hager said he was returning home with his family that included his sick mom. They were returning home to the United States where his mother has lived since 1995. As they were waiting in line at the airport in Iraq on Friday, he was told that he could pass through because he was a U.S. citizen. But his family members – including his mom – weren’t allowed, despite holding green cards.

After the story aired, the Imam at Hager’s mosque, Husham Al-Hussainy, contacted the media and told them the truth.

“That’s true. The 22nd of January, his mom died,” Al-Hussainy said. “She did die but that was a couple weeks ago – before the ban.”

The kicker to all this? Al-Hussainy voted for Donald Trump. He called for “peace and patience.”

“There is confusion. There is a mix that they have to distinguish between good refugees and bad refugees and if this is what it takes to stop them for a while, to screen them, that’s fine for the security of the country,” he said.

Hager is an Iraq war veteran. When confronted about his lie, he sent a reporter a text: “Since I lost my mom I’ve been on heavy medication – I can’t even sleep. I did not make anything up.”

This is just another case of the media latching on to anything that makes Trump or conservatives look bad, not doing due diligence and confirming the report, only to have it blow up in their faces.