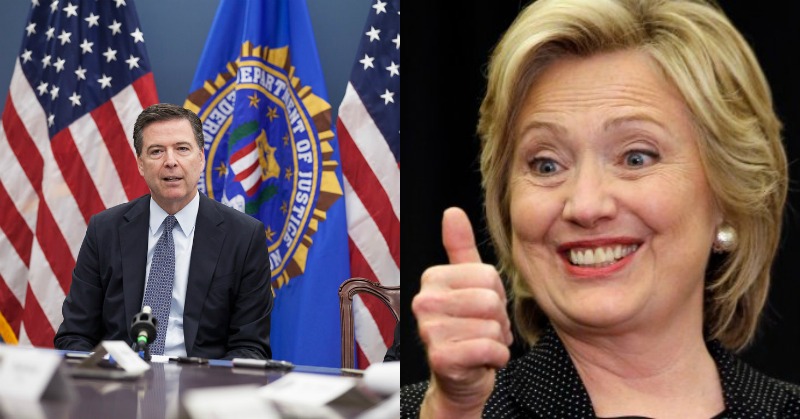 FBI Director James Comey’s refusal to recommend an indictment of former Secretary of State Hillary Clinton over her use of private servers to conduct official government business screamed of a coverup, and his latest testimony before Congress just added more evidence that the fix was in all along.

Five key players in the Clinton private server scandal were granted immunity by the Department of Justice. In two cases, it is documented that they lied after being granted immunity, which is a felony and should result in their immunity deals being revoked.

As the New York Post reported, Comey, as a federal prosecutor, put Martha Stewart in jail for making false statements and also helped to convict Scooter Libby for the same thing.

Paul Combetta, the Platte River Networks employee who deleted Clinton’s emails after a Congressional subpoena was served to preserve the records (which was, of course, also illegal), lied when he claimed on Feb. 18 that he didn’t know about the subpoena in an interview with agents — he later admitted, in a second interview on May 3, that he did know.

Combetta was granted immunity by the DOJ in 2015 in exchange for his full cooperation — including honest testimony. Despite this, he refused to divulge just what was said in a 2014 conference call he participated in with former Clinton aides and a lawyer in which they discussed deleting the emails.

Despite the evidence, Comey didn’t revoke Combetta’s immunity deal because he claimed, in front of the House Judiciary Committee on Wednesday, that Combetta was a “low level guy.” Had he done so, he could have pressed Combetta for information, but he just closed the door.

House Judiciary Committee member Rep. John Ratcliffe (R-Texas) said, “When I was at the Department of Justice, your reward for lying to a federal agent was a potential obstruction of justice charge,” and added, “It wasn’t immunity.”

Rep. Jason Chaffetz (R-Utah) exposed the lies of Cheryl Mills, Clinton’s chief of staff, who was also granted immunity by the DOJ. Mills claimed that she didn’t know about the private servers, yet she sent an email to the server administrator asking, “is server ok?” when emails she sent to Clinton’s email on the private server bounced back.

Comey claimed that there just wasn’t enough evidence to prove obstruction. However, take a look at this list of things that the FBI was denied access to (a.k.a. obstruction) as reported by the New York Post:

This massive destruction of evidence was included in Comey’s investigative case summary, yet he claimed that he couldn’t prove obstruction.

Ratcliffe said that these actions lead “not just reasonable prosecutors but reasonable people to believe that maybe the decision on this was made a long time ago not to prosecute Hillary Clinton.”

As the New York Post noted, either the fix is in or this is one of the most inept investigations in FBI history. It’s one or the other. It could be both, of course, but either way justice has not been served here and that is shameful, no matter how much Comey claims otherwise.