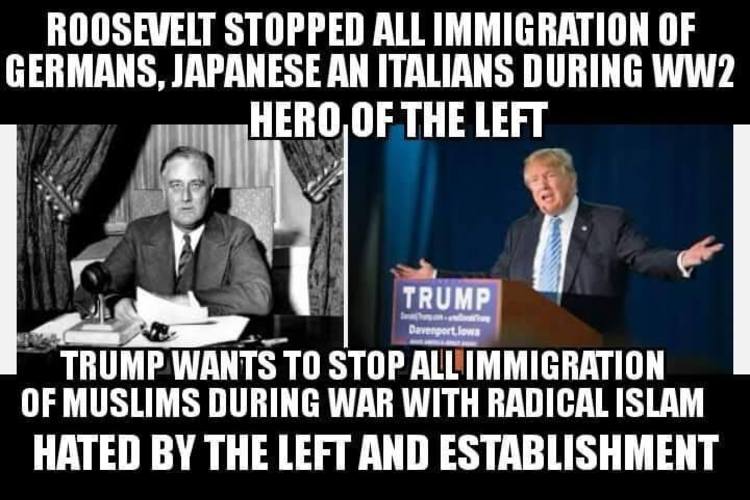 reports Trump and Jimmy Carter had the same idea — to stop immigration during wartime:

Liberals are beside themselves that Donald Trump would suggest a hiatus on permitting Muslim refugees to thwart terrorism, but one very liberal President did almost the same thing.

During the 1980 hostage crisis, then-President Jimmy Carter issued a series of executive orders to tighten the screws on the government of Iran – among them were banning Iranians from entering the United States, FrontPageMag first reported.

Here are Carter’s comments upon making the action.

The Secretary of Treasury and the Attorney General will invalidate all visas issued to Iranian citizens for future entry into the United States, effective today. We will not reissue visas, nor will we issue new visas, except for compelling and proven humanitarian reasons or where the national interest of our own country requires. This directive will be interpreted very strictly.

Carter did this while hundreds of Americans were held hostage by Iranian students in Tehran. At the time, there were no comparisons to Hitler, or Mussolini or even right-wing Republicans.

But Carter went even further, requiring Iranian students in the United Statesto turn themselves in.

Interestingly enough, Carter did this by invoking the Nationality Act of 1952. A law originally opposed by Democrats for its attempt to restrict Communist immigration to the United States.

“If this oasis of the world should be overrun, perverted, contaminated, or destroyed, then the last flickering light of humanity will be extinguished,” Senator McCarran said of the law. He was a Democrat.

Now unlike Muslims, Iranians were not necessarily supportive of Islamic terrorism. Many were and are opponents of it. Khomeini didn’t represent Iran as a country, but his Islamist allies. So Trump’s proposal is far more legitimate than Carter’s action. Carter targeted people by nationality. Trump’s proposal does so by ideology.

Classifying Iranians as a group is closer to racism than classifying people by a racist supremacist ideology that calls for the mass murder and enslavement of non-Muslims, as ISIS is doing today.

One of the neater subsets of the 1952 Act barred the entry of, “(11) Aliens who are polygamists or who practice polygamy or advocate the practice of polygamy.”

Maybe the professional conservatives running around shrieking their heads off can calm down now long enough to have a rational conversation on the subject.