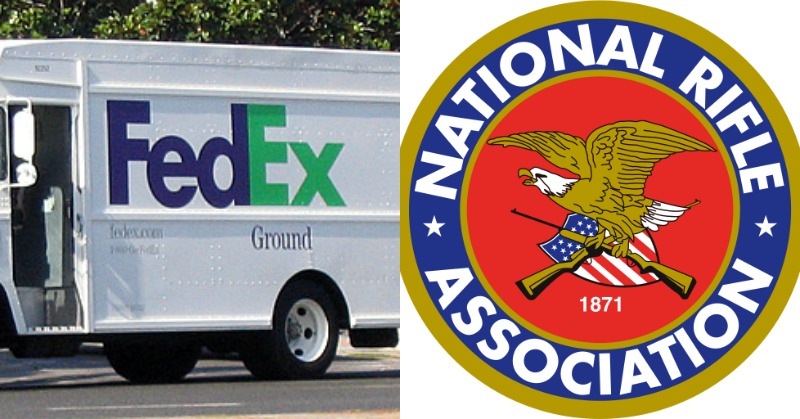 Members of the National Rifle Association got a Christmas gift from FedEx — they could get as much as 26 percent off of their shipping needs. Of course, the anti-Second Amendment crowd isn’t happy about it and is in meltdown mode.

A new organization, called Guns Down, created an online campaign against the shipping giant. They have also planned protests at FedEx stores in Denver, Atlanta, Memphis and Orlando. The coalition is made up of the Human Rights Campaign, Color of Change, Newton Action Alliance and Pride Fund to End Gun Violence.

“FedEx is one of the biggest and most recognizable brands,” Guns Down Director Igor Volsky said. “If they really value investing in under-served communities, which we think they do, then partnering with the NRA really undermines that mission.”

Just used @FedEx to ship my last Christmas gift. Thank you for my @NRA discount (available for members!)!

How dare FedEx, a company that serves millions of people every year, offer a benefit to Americans that appreciate and are willing to fight for their right to keep and bear arms! I mean, the injustice of it all, you guys! Offering a benefit for a group that respects and defends a crucial constitutional right? Egads!

FedEx offers shipping discounts of as much as 26 percent to members of the NRA, the gun-rights group with 5 million members, as part of a program that also has special offers for Visa cards, according to Guns Down.

Separate programs offer deals on Hertz rental cars and Wyndham hotels, according to the NRA website.

Guns Down is joined by Color of Change, which advocates for minorities, Newton Action Alliance and Pride Fund to End Gun Violence, Volsky said.

Color of Change was credited for helping discourage companies from supporting this year’s Republican National Convention because of President-elect Donald Trump’s views on minorities.

In August, it called out BlackRock Inc. for investments in gun companies in index-based funds. The New York-based company has said it supports LGBT rights and that the gun investments are automatic, as part of the index, and not managed by BlackRock.

These anti-Second Amendment groups have decided to hit back at companies that refuse to shun people who simply want to exercise the rights afforded to them in the Constitution.

Instead of shunning pro-Second Amendment groups, perhaps any of these individuals who genuinely want to stop gun violence should talk to them. They would quickly learn, if they were open to it, that taking away gun rights is the opposite of what we need to do to keep people safe and that their crusade to stomp on our right to keep and bear arms will do the opposite.