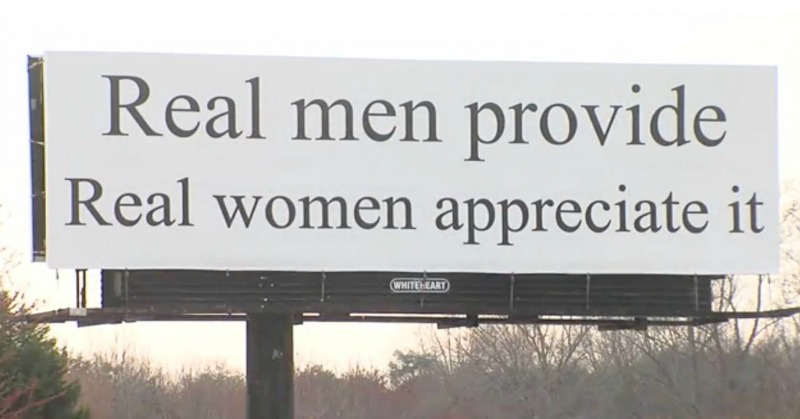 The above sign has sparked outrage among feminists who don’t thing this mindset should be “widely-accepted” or “normalized.”

In fact, they were SO upset by this billboard, they protested near it on the side of a busy highway.

“What we’re protesting and angry about is not that an individual and some individuals decided to do this. It’s more the fact that that mindset exists at all and not just that it exists but that it is actually a fairly normalized well-accepted mindset. The implied expectation that regardless of mitigating circumstances women should be appreciative of her man and that, to me, and that’s the whole thing.”

Call me a self-hating woman, but I don’t understand what is controversial about men providing and women appreciating it?

Biologically speaking, men are supposed to be the provider for the family and that’s how it’s been for a long time. That’s not to say women should stay in the kitchen and not bring anything to the table, because that’s not what the sign implies.

Women, there is nothing wrong with appreciating your man contributing and bringing home the bacon. You define the boundaries of your relationship and no feminist should have say in how you conduct your household.

The sign has since been updated to reflect the outrage it created. It now reads: “Much Ado About Nothing. A social experiment that brought forth those so immersed in their own insecurity that in the mirror they could only see an angry victim of their incorrect interpretation of a silly billboard — Bless their hearts.”

Essentially, these feminists got trolled. Way to go, ladies.