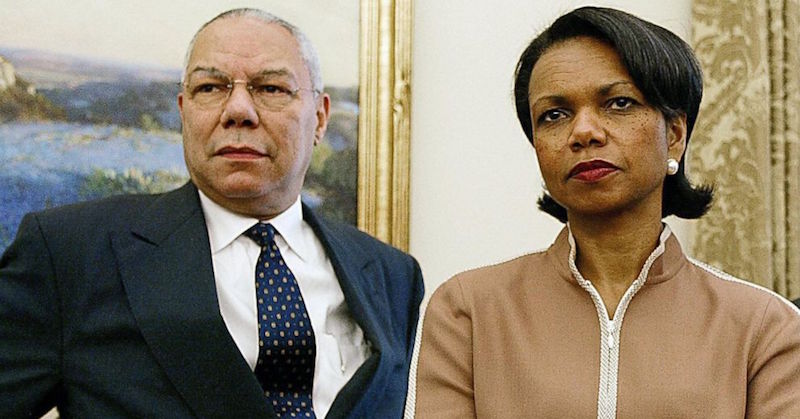 The idiotic claim that Colin Powell told Hillary Clinton at a dinner party about how awesome it was to use personal email accounts for official correspondence took another blow Monday when another top security official spoke up.

Condoleezza Rice, who attended the 2009 dinner party where Clinton claims Powell advised her to use her personal email account, said she has no recollection of any conversation taking place.

Powell was the first to deny any such “conversation” at a dinner party, undercutting Clinton’s claims that it was just fine for former Secretaries of State, so it’s perfectly acceptable for her.

As we reported earlier, Powell did send then-Secretary Clinton an email describing his use of his personal AOL account for unclassified messages, but there was no equivalent system within the State Department. The dinner party took place at Madeleine Albright’s home – another former Secretary of State. Former Secretary Henry Kissinger was there as well.

All the secretaries were asked to give Clinton advice as she took on her new role in the State Department, The Daily Caller is reporting.

Much of the allegation comes from New York Times reporter Joe Conason, who is publishing a book next month that details the dinner party based on his interviews with Hillary:

“Toward the end of the evening, over dessert, Albright asked all of the former secretaries to offer one salient bit of counsel to the nation’s next top diplomat,” Mr. Conason writes. “Powell told her to use her own email, as he had done, except for classified communications, which he had sent and received via a State Department computer.”

On Friday, Powell issued a statement saying he had no recollection of the dinner party exchange. The next day, he told reporters Clinton was trying to “pin” her decision to use a homebrew email server on him.

It is possible that that Rice was not present at the dinner table when Powell provided his advice, though Conason’s book suggests that all of the former secretaries of state were there.

Georgia Godfrey, Rice’s chief of staff at the Hoover Institution at Stanford University, where Rice teaches, tells The Daily Caller that Rice does not recall the discussion.

“Dr. Rice’s isn’t doing any media right now. I can tell you though that she has no recollection of that conversation either,” Godfrey told TheDC.

To compare Powell’s email use with Clinton’s is silly anyway. Powell used his personal e-mail for non-classified correspondence and used the secure State Department system for classified messaging.

Clinton, on the other hand, flatly refused to use the State Department server, despite being provided with one. More than 100 emails so far have been uncovered that were classified at the time they were sent.