Despite a furious effort by Democrats and their stooges in the media, it is looking as if the explosive four-page House Intel memo could be released to the public in the very near future.

On Monday, the House Intelligence Committee will meet at 5 pm ET and speculation is swirling that the Republicans on the committee will vote in favor of releasing the memo.

The contents could deal a huge blow to the phony narrative that Russia colluded with the Trump campaign to steal the election from Hillary and will certainly expose abuse of FISA laws to hijack the nation’s surveillance system for political purposes.

The Justice Department is on record as opposing the release of the document but according to reports, President Trump supports making it public.

Could it be that Jeff Sessions is warming to the idea? During a speech in Norfolk, VA last week, Sessions promised to “depoliticize” the DOJ and it would seem that a good way to get a start on that initiative would be #ReleaseTheMemo.

Via the Washington Examiner “House Intel meets Monday and could vote on memo release — is Jeff Sessions softening his stance?”:

The House Intelligence Committee meets at 5 p.m. Monday in the Capitol. The meeting will give the committee its first opportunity to vote on the question of releasing the so-called “FISA abuse” memo that has captured Washington’s attention in recent days. Since the GOP holds a 13 to 9 advantage on the committee, the overwhelming likelihood is that if there is a vote, the panel will decide, along party lines, to release the memo.

At that point, House rules call for the committee to await a decision by the president on whether he supports or opposes release of the memo. President Trump has made clear he supports release, so the memo could be made public quickly.

The public might also learn committee Democrats’ plans for a counter-memo. Ranking member Rep. Adam Schiff has accused Republicans of cherry-picking and distorting the intelligence underlying the GOP memo, and last Wednesday announced that Democrats would “draft our own memorandum, setting out the relevant facts and exposing the misleading character of the Republicans’ document.”

It is unclear what the Republican majority’s reaction will be if Democrats produce a memo and demand a vote. Obviously, Democrats will not win if the two parties disagree, but it’s not clear what each side’s tactics will be.

Meanwhile, the Justice Department continues to oppose publication of the Republican memo. In a Jan. 24 letter to Intelligence Committee chairman Devin Nunes, Assistant Attorney General Stephen Boyd said it would be “extraordinarily reckless” for the panel to release the memo without giving the Justice Department and the FBI a chance to read it and object.

Rep. Adam Schiff has served as the chief inquisitor in the congressional witch hunt based on the phony Fusion GPS dirty dossier and is in this up to his eyeballs. Note the desperation of a cornered rat as the congressman who represents the loony liberals in Hollywood is producing his own “minority report” which will certainly get the bulk of the media attention.

Shiff’s desperation was nowhere more evident than when he and fellow Californian Senator Dianne Feinstein sent a letter to social media giants Twitter and Facebook demanding that the corporations conduct an investigation into whether “Russian bots” were responsible for promoting the “ReleaseTheMemo hashtag.

NEW: Sen. Feinstein, Rep. Schiff urge Facebook and Twitter to investigate involvement of Russian bots in pushing "Release the Memo" campaign: "If these reports are accurate, we are witnessing an ongoing attack by the Russian government through Kremlin-linked social media actors." pic.twitter.com/SkAci5NefK 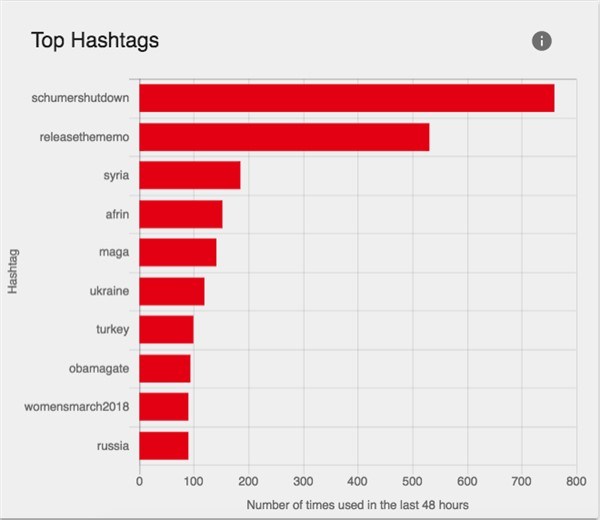 The dynamic duo was relying on information from a think tank called The Alliance for Securing Democracy which is filled to the brim with Never Trumpers and neocons including:

Bill Kristol: Neocon propagandist, co-founder of the Project for the New American Century (PNAC) and a man who worked desperately to field an anti-Trump spoiler candidate who would have swung the election to Hillary.

Jake Sullivan: Former national security advisor to Vice President Joe Biden and director of Policy Planning at the U.S. Department of State, as well as deputy chief of staff to Secretary of State Hillary Clinton. He was the senior policy advisor on Secretary Clinton’s 2016 presidential campaign.

Michael Morrell: Former Obama administration official who was the acting director of the Central Intelligence Agency in 2011 and again from 2012 to 2013. Morrell also wrote an op-ed for the New York Times in 2016 endorsing Hillary Clinton for president.

David Kramer: Was senior director for The McCain Institute for International Leadership AND was the man hand-picked by Senator John McCain to take delivery of the Fusion GPS-Christopher Steele dossier.

Michael McFaul: Former Obama administration ambassador to Russia as well as a virulent critic of both the country and President Vladimir Putin. A warmonger’s warmonger.

Not exactly what you can call an unbiased collection. Kramer is especially notable given his role in meeting with scummy Brit spook Christopher Steele as a cutout for Senator John McCain.

The release of the memo could be big trouble for a lot of people who have been involved in what can only be described as a coup d’etat to displace the legitimately elected POTUS and the key is how the dirty dossier was used to abuse FISA in order to spy on President Trump and his associates.

This is a scandal that will dwarf Watergate if the truth is allowed to escape containment.