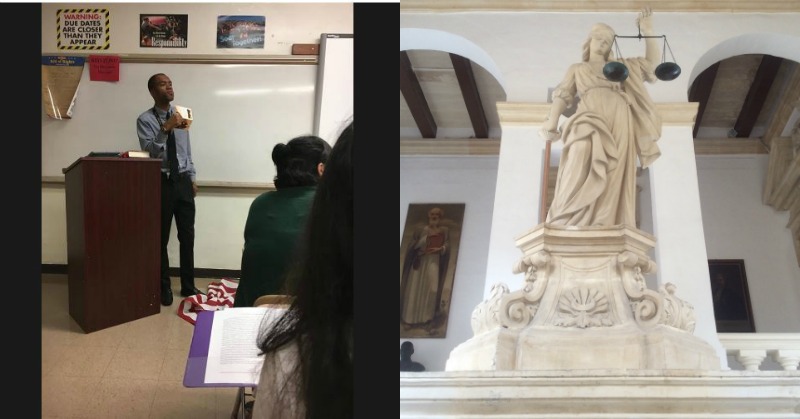 A teacher in Fayetteville, NC found out the hard way that freedom of speech is a two-way street and gave a glaring example of why the school system is failing our children.

WNCN reported that Lee Francis, a teacher at Massey Hill Classical High School, stomped on the flag in what he claimed was a lesson about freedom of speech.

According to the Fayetteville Observer, Francis had been placed on paid administrative leave after he desecrated the flag. Francis’ reaction to his stunt showed that he needs to educate himself before he can be tasked with the education of others.

“I put it on the ground and I used my right foot and I took two steps on it, and immediately two kids get out of the room,” Francis told WNCN.

“He was teaching a junior-level American History class with 26 students when the incident happened Monday. He had been teaching about Texas v. Johnson, a case that upheld that flag desecration was protected by the First Amendment and the Bill of Rights.

Francis was informed by the school district’s human resources department Tuesday afternoon he’ll remain on leave until the investigation is complete.”

“But this is exactly what I teach: You don’t teach kids how to think or what to think; you teach them to go their own path,” Francis said. “If they feel so convicted that this is their cause they’re going to stand for, I don’t blame them. It’s an upper-level school for those who aspire to go to college and in that regard, we have rigor and expectations, so I treat them as such.”

In typical liberal fashion, Francis forgot that there’s a world outside his bubble. You may have a legal right to do something, but that doesn’t exempt you from consequences.

If parents do not like the way you are teaching their children, they have every right to speak up in response and the school district should absolutely hear their concerns and respond accordingly.

I can think of a list of words that at at many workplaces would get an employee shuffled off to “sensitivity training” or even fired from their jobs, and those are jobs without children involved. I wonder if Francis would advocate for change in this regard? I doubt it.

The PC police are fine with stifling freedom of speech when it comes to certain words for protected groups, but when it comes to bashing America, all of a sudden the left fashions themselves as “constitutionalists.”

As soon as the left speaks up for all speech, they’d have a potential argument; at least they would if these were adults and not high school kids. Until then — no dice. Even then, there are still consequences for your actions in a free market, which liberals hate. You can say or do something, but that doesn’t mean people have to sit around and listen to it.

You may be legally allowed to stomp on the flag, but it doesn’t make you any less of a jerk and it doesn’t mean parents and students have to put up with it.