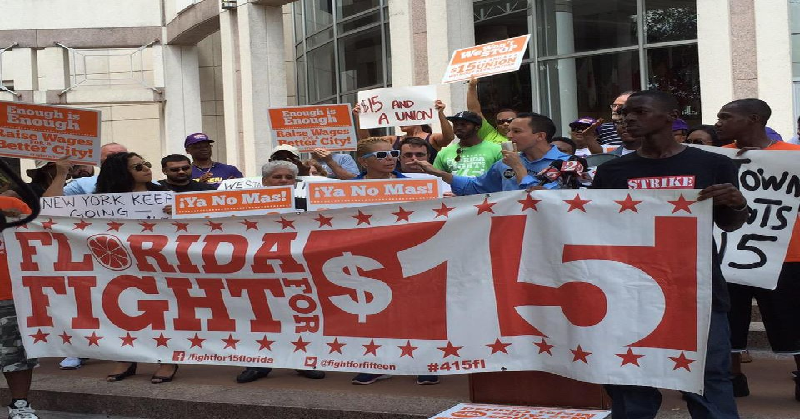 Florida Governor Rick Scott is thrilled that California has hiked their minimum wage to $15 an hour.

There’s been an exodus of businesses from the Golden State, and most of those businesses have been relocating in Red States.

This will only further that trend and he thinks Florida can capitalize on it. Seven hundred thousand people are expected to lose their jobs as a result of California’s hike.

WhenRick Scott traveled to California recently to speak at the Milken Institute’s annual gathering of business leaders in Beverly Hills, it wasn’t just to schmooze with potentates. It was also a “trade mission” meant to persuade California companies to move to Florida.

“Our taxes are lower than in California, our regulations are less,” Scott, who’s been governor since 2011, explains in the video above. “I want more jobs in our state.”

He’s getting them. Car-rental firm Hertz (HTZ)recently moved its headquarters from New Jersey to southern Florida. Wawa, the popular convenience store chain concentrated in the mid-Atlantic states, plans to focus its expansion efforts in Florida. Total employment in Florida has grown by 14.3% over the last five years, compared with 9.5% for the nation as a whole.

While some states and cities have been raising the minimum wage well above the federal level of $7.25 an hour, Scott points to some research showing higher wages will lead employers to hire fewer people.

“Raising the minimum wage means people are going to lose their jobs,” he says. “In Florida, you can compete globally.” By that, he means that the Florida minimum wage of $8.05, while higher than the federal minimum, can help companies compete with foreign producers in China, Mexico, Vietnam and elsewhere that pay a fraction of U.S. wages.

The research backs him up. As economist Robert Murphy shows, States that have their minimum wages set above the minimum suffer higher unemployment rates of young and low skilled workers than those who keep their wages at the minimum.

What seems to be happening here is liberal policies benefiting conservatives at the expense of liberals. Talk about unintended consequences.