Automobile manufacturers are looking to the future by investing heavily in self-driving vehicles, which are already showing up on American roads and will become more commonplace in years to come.

This merger of automotive and artificial intelligence technology won’t be limited to consumer and commercial interests or have that WOW factor like the Budweiser self-driving beer truck that debuted in 2016, because the cops are going to want in on the action.

Law enforcement will be one of the top markets when autonomous vehicles are the norm, and Ford has wasted no time in applying for a patent for a self-driving police car that would not only be able to determine whether a driver is speeding, but also issue a ticket.

Ford aims to patent an autonomous police car that can ticket you https://t.co/kom2q3y6Rm pic.twitter.com/0OuUhOzLQs

Via Roadshow, “Ford aims to patent an autonomous police car that can ticket you”:

Ford applied for a patent (which was only recently published) for an autonomous system with a police car that can either act on its own or alongside a traditional human officer. The robot cop — but not RoboCop — can determine when a violation has occurred on the road, and it can take various actions.

It can refer the case to a local speed camera or another connected sensor for corroborating evidence. It could also begin a pursuit of the vehicle in question, or if it’s something simple like a warning or a speeding ticket, it can just wirelessly communicate the violation directly to the offending vehicle, which can respond with an image of the driver’s license to ensure the ticket reaches the right person.

How would it work? Here are some illustrations from thepatent application: 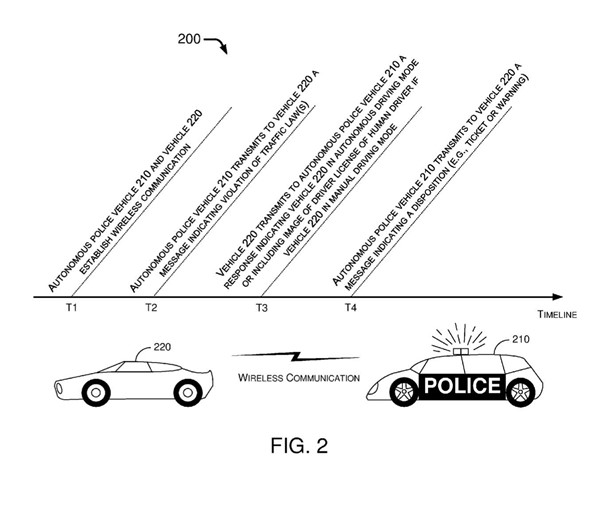 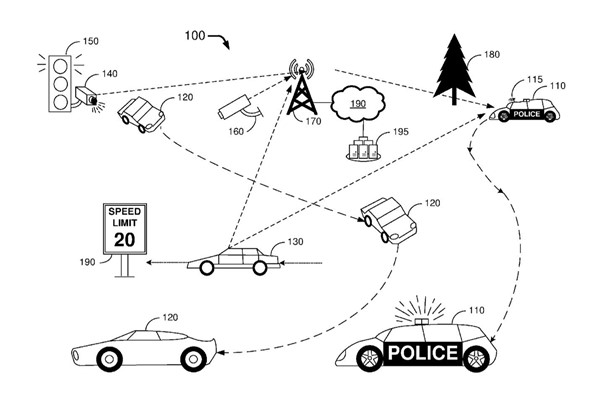 Roadshow points out that some of the technology for automated ticketing has already been in place through the use of those red-light cameras that are placed on stoplights in various locations throughout the country.

There’s also the matter of automated ticketing. Red-light cameras and speed cameras have come under fire in recent years for doing police work without a police officer present. While it’s true that cops can’t be everywhere all of the time, and thus crimes will slip through the cracks, these cases show that the public is already wary of automated policing before super-AIs and self-driving cars were even part of the discussion (and they still aren’t, really).

Nevertheless, it’s intriguing to see how the industry views the role of policing as we move toward autonomous vehicles. As Ford’s patent application points out, AVs might be incapable of breaking the law, but if there’s a human-driven mode, there’s still a need to watch over the roads.

Of course, just because there is a patent doesn’t necessarily mean that the autonomous police car will end up being developed. It could be that Ford was just trying to get a jump on competitors or prevent anyone else from producing such a vehicle first.

The patent application was filed in 2016.

It is probably inevitable that it won’t stop at simply issuing speeding tickets, but it isn’t likely that heavily-armed Robocops will be out there in the near future.