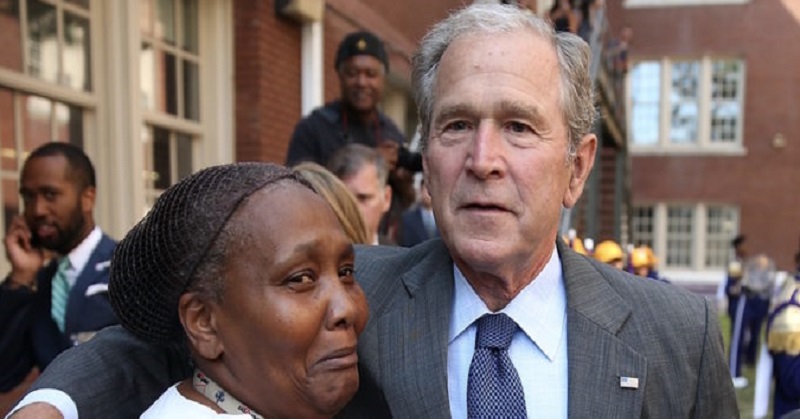 The liberal media and Democrat Party demonize every Republican president as racist. Former President George W. Bush was no exception.

National tensions over race have, however, reached new highs under President Obama’s leadership. Thirty five percent of Americans worry a lot about race relations now compared to just 13% shortly after Obama took office in 2009, according to a recent Gallup poll.

This is not coincidental. It is Democrats, who constantly view the world through the prism of race and instigate racial division. After seven years of the Obama presidency, it’s clear who is rubbing racial sores raw.

Bush joined President Obama in Dallas on Tuesday at the memorial of the five Dallas police officers who were brutally assassinated last week by a gunman.

GWB lamented the divisions in the U.S. that gave rise to the recent violence. The contrast between his and Obama’s speeches was like night and day.

“Most of us imagine we’d risk lives to protect love ones: Those in uniform assume that risk for the safety of strangers,” Bush said.

BUSH: “Most of us imagine” we’d risk lives to protect love ones: “Those in uniform assume that risk for the safety of strangers"

Bush reminded audience members that we all have more in common than differences.

“At our best, we honor the image of God we see in one another. We recognize that we are brothers and sisters, sharing the same brief moment on earth and owing each other the loyalty of our shared humanity. At our best, we know we have one country, one future, one destiny. We do not want the unity of grief, nor do we want the unity of fear. We want the unity of hope, affection, and high purpose,” Bush said. “We know that the kind of just humane country we want to build that we have seen in our best dreams is made possible when men and women in uniform stand guard. At their best, when they’re trained and trusted and accountable, they free us from fear. The Apostle Paul said, ‘for God gave us the spirit not of fear, but of strength and love and self-control.’ Those are the best responses to fear in the life of our country.”

Under unimaginable circumstances, Bush knew how to console us when we were hurting, protect us when we were scared, and lead us as a nation united. He is missed in times like these.

President Obama, on the other hand, used his speech at the memorial to do what he does best, return to his favorite themes of  discrimination, police brutality and racism. He is turning back the clock on race relations, causing a division in this country that will take years to overcome.