Europeans are about to learn a very hard lesson on socialism, green energy and the danger of relying on an enemy state to supply their energy needs.

Talking about why prices rise during peak hours Von Der Leven declared “Because in these peak demands the expensive gas comes into the market. So what we have to do is flatten the curve and avoid the peak demands. We will propose a mandatory target for reducing electricity use at peak hours and we will work very closely with the member states to achieve this.”

“Flatten the curve?” Where have we heard that phrase before?

This is but another example of the ineffectiveness of green energy and shows how bad public policy can destroy even the most advanced and prosperous economies.

More on the scale of Europe’s energy crisis via Zero Hedge:

What is the scale of the energy challenge?

We got a very shocking sense of the staggering numbers involved in the existential, crippling European crisis earlier today when Norwegian energy giant Equinor echoed what Zoltan Pozsar said in March, warning that “European energy trading risks grinding to a halt unless governments extend liquidity to cover margin calls of at least $1.5 trillion.” As Bloomberg put it, in its best non-Zoltan imitation, “aside from inflating bills and fanning inflation, the biggest energy crisis in decades is sucking up capital to guarantee trades amid wild price swings. That’s putting pressure on European Union officials to intervene to prevent energy markets from stalling.”

“Liquidity support is going to be needed,” Helge Haugane, Equinor’s senior vice president for gas and power, said in an interview. The issue is focused on derivatives trading, while the physical market is functioning, he said, adding that the company’s estimate for $1.5 trillion to prop up so-called paper trading is “conservative.””

In other words, massive amounts of newly-printed funding (because with yields blowing up, Europe’s fiscal stimulus will be over before it started unless central banks step in and backstop the latest energy hyperinflation bailout plans) will be required to avert an energy disaster. Alas, the final number will be even more massive, because overnight Goldman’s research team published a must read note (available to pro subs), in which the bank looked at the scale of the energy bill challenge, potential European government responses and industry implications, and quantified the total damage. The numbers are staggering:

“For most families and industrial customers, energy bills are renegotiated every twelve months; on our estimates, energy bills for most consumers will peak this winter. We estimate a c.€500/month cost for power and gas currently, implying a c.200% increase vs. 2021 when average bills were c.€160/month. Energy bills could approach €600/month in a zero flows (from Russia) scenario we believe (see here for more on this zero flows scenario). “

Europeans are about to learn a very hard lesson indeed. Unfortunately our government seems intent on taking us down the same destructive path as Europe in terms of committing energy suicide.

What did the socialists use before candles? Electricity… 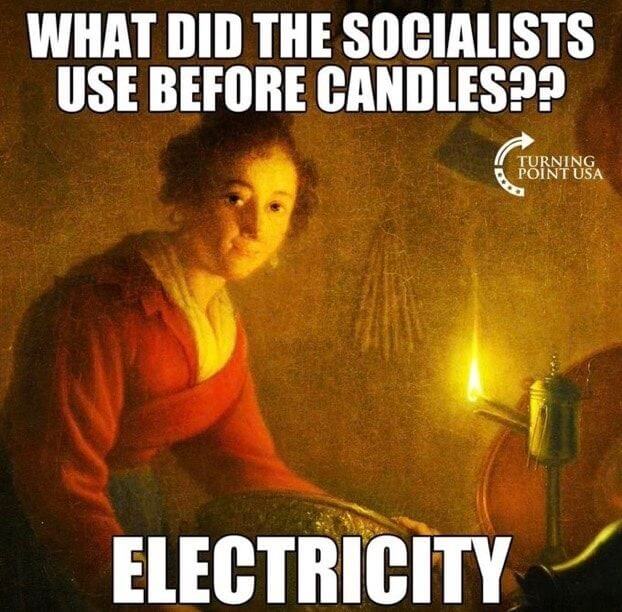