Google Maps can be good and it can be bad. It seems to take privacy for granted and whether you like it or not, your home is most likely on there in one form or another.

Google Maps is now adding something new to their site – the ability to see which of your neighbors are using solar power. Given these satellite images probably already existed, it’s not that big of a deal but they are actually pushing it out there as well. As The Atlantic reports:

…Google will put the finding into practice with Project Sunroof, its free online tool that aims to make it easier for people to obtain and use home solar panels. Project Sunroof will now not only inform users how much sun hits their roof, or how much solar panels would save them per month, but also which of their neighbors have taken the plunge first.

Now—in a nod to the powerful peer effects of solar power—it will also show you which of your neighbors have already installed panels. In its map view, Project Sunroof will show a red dot over any home or structure that appears to have rooftop solar.

“People want to know: ‘What if there’s some hidden gotcha in the contract?’—and usually there isn’t. ‘Does this work for other people like me? Is solar really viable in my neighborhood?’” Elkin says. “You can zoom around through your town and understand how common solar is in your neighborhood. And many people have found: Wow, there is a lot more solar in my neighborhood than I’d realized.”

In one way, this could be a good idea because then if someone is interested, maybe they DO strike up a conversation with their neighbors but most likely, if they were already interested, they would have already done that.

You can imagine in the not-so-distant future how this could be used to bully neighbors who don’t have solar panels because that’s how the left rolls, especially the ‘green crowd.’

This isn’t the first time there’s been strange things to look at on Google Maps .

A mark that looks similar to a crop circle was recently seen on Google Maps.

Crop circles have been interpreted as a sign of paranormal activities. For a long time some have believed aliens are communicating with humans via markings on the ground.

A number of hoaxes were carried out by Doug Bower and Dave Chorley in the 1970s, causing a media storm when some claimed they were evidence of a UFO landing.

However, some looking at this strange pattern found in the Egyptian desert would be forgiven for assuming there was something other worldly about it.

The pattern, with two spirals that spin out from the centre, seems to show a number of mysterious mounds and holes in the sand.

However, far from being the work of an extra terrestrial – this pattern is definitely man made.

In fact, it is an art work.

The pattern was created by three artists and is an enormous 1 million square foot in diameter. 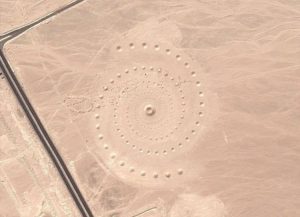 The piece is called Desert Breath and is meant to show the passage of time and the nature star o the desert.

One spiral is made of mounds, while the other is made up of holes. Over time the winds will slowly blow the hills away and fill the depressions, causing the desert to eventually revet back to its natural state.

It seems humans will have to wait a little longer before they see any messages from outer space.