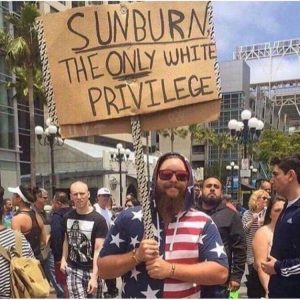 Seth Connell asks do you have a well-functioning mind? Do a lot of people consider you to be smart, sharp, or intellectual? Well, you’re privileged then, and that’s just wrong.

In yet another example of how the Left will find ways to create victim-classes which they can subsequently use for social control schemes, the newest class of “privileged” people is those who are intelligent, who have “cognitive privilege.”

A student newspaper, The Daily Iowan, published an op-ed which explains that before understanding “White privilege,” we must first understand “privilege” itself. Part of that involves understanding this “cognitive privilege” that some people have.

There are many kinds of privilege besides white privilege: cognitive privilege, for example. We now know that intelligence is not something we have significant control over but is something we are born with. We are living in a society in which success is increasingly linked to one’s intelligence. This is not to say that intelligence is the only factor that is important. All that is implied is that below a certain threshold of intelligence, there are fewer and fewer opportunities. These opportunities are being shifted upward to jobs that require heavier cognitive lifting or else are being replaced by robots. Thus, the accident of having been born smart enough to be able to be successful is a great benefit that you did absolutely nothing to earn. Consequently, you have nothing to be proud of for being smart.

Once we have admitted the reality of privilege itself and identified some species of privilege, we are better able to talk about the temperature-rising topic of racial privilege.

Sounds like a rather condescending, masked form of class warfare to me…

Now, to be fair, the author mentions that the intent here is not to create some form of “Catholic guilt in someone’s psyche,” but that those who have this kind of “cognitive privilege” must be more sympathetic to the plight of those below them.

Again, that’s rather condescending. The implication here is that one’s intelligence is not something that can be changed. By saying that one is “cognitively privileged,” and emphasizing that fact, it will eventually create a sense of guilt in that person. That sense of guilt stifles the human spirit, and keeps people in lowly places. If one is simply going to be hated for having an excellent mind, why put in all the work to achieve such?

We as human beings are not limited to merely what we currently have in our minds at any given point; we can expand the scope of our knowledge through reading and education. These opportunities are forbidden to no one, and especially with the prolific nature of the internet, there simply is no excuse to be uninformed.

Nearly all of the information ever known to mankind is available right on the device on which you are reading this story. A simple search can yield countless results that, if one pursues, can expand that person’s knowledge to truly incredible levels.

Ben Carson is a perfect example of this. He was born in a poverty-stricken home, and his mother could not even read. Yet his mother encouraged him to read all his young life, and that stuck with him throughout the rest of his life. Despite the position in which he started, his effort to learn brought him out of poverty and into a world-renowned position as a neurosurgeon.

Intelligence is not limited to people by birth. While it’s true that some people’s minds operate differently than others, it doesn’t mean that one person is “cognitively privileged” and the other is not. Is there not work ethic to consider in this?

The author claims that jobs that people held previously, many blue collar jobs, will be eventually taken by automation, and so “cognitive privilege” will become more exacerbated over time. So what is the conclusion that will eventually be drawn from this?

Reparations: smart people have been exploiting dumb people, and they need to fork over the fruit of their labor.

If thought like this gains traction, the idea of racial privilege will be the least of our worries (and that idea was started by a White Feminist back in the 1980s, believe it or not).