The Boston Globe’s David Scharfenberg suggests that “if gun-control advocates really want to staunch the blood,” confiscation is the only way.

Gun control advocates know better than to check the facts before jumping to conclusions. They claim that gun-related violence in the U.S. can be blamed on higher rates of gun ownership.

But a simple glance at murder rates in U.S. states by guns show that no correlation between gun ownership and gun murders exist.

Scharfenberg insists that the U.S. has an “astronomically high” rate of firearm violence twists some important facts.

First of all, as TFPP has reported before, less legally owned guns doesn’t mean less homicides. 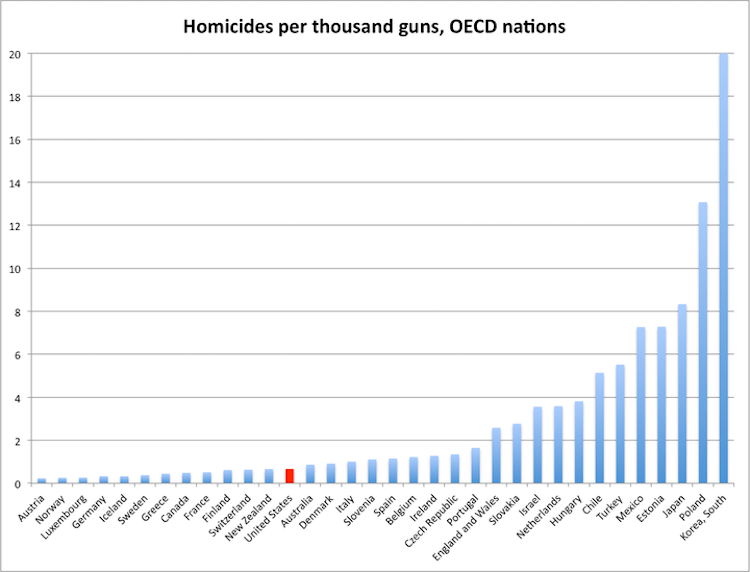 Furthermore, suicide accounts for 2/3rds of incidents of gun “violence” in the U.S. And if you think less guns means less suicide, just take a look at South Korea and Japan, which both have astronomically few guns and incredibly high suicide rates.

At a New Hampshire forum in the fall of 2015, Democratic presidential candidate Hillary Clinton spoke approvingly of an Australian gun buyback program that collected more than 650,000 weapons — a buyback that, she neglected to mention, was compulsory.

And just a few months earlier, then-President Barack Obama offered coded support for the same confiscatory approach. “When Australia had a mass killing — I think it was in Tasmania — about 25 years ago, it was just so shocking, the entire country said, ‘Well, we’re going to completely change our gun laws,’ and they did,” he said.

Democrats have even let the word “confiscation” slip out, on occasion. After the shooting rampage at Sandy Hook Elementary School in Newtown, Conn. in 2012, New York Governor Andrew Cuomo said in a radio interview that when it came to assault weapons “confiscation could be an option, mandatory sale to the state could be an option.”

It was an option Cuomo didn’t pursue. But five years after that slaughter of schoolchildren — and with fresh tales of murdered kids on the floor of a Texas church — might gun-control advocates expand their agenda?

[…] The United States’ astronomically high rates of firearm violence aren’t rooted in some unique American propensity for derangement and delinquency. Studies show our levels of mental illnessand basic criminality are on par with other wealthy countries.

Other common explanations, like the social fissures created by our racial diversity, have been debunked by researchers, too. The only explanation left — an explanation borne out by a number of careful studies — is the sheer size of the American arsenal. There are 310 million handguns, shotguns, and semi-automatic weapons in American homes, garages, and waistbands.

Ultimately, if gun-control advocates really want to stanch the blood, there’s no way around it: They’ll have to persuade more people of the need to confiscate millions of those firearms, as radical as that idea may now seem.

They are mistaken, and their promises will be as hollow as the evidence they use to make their case.