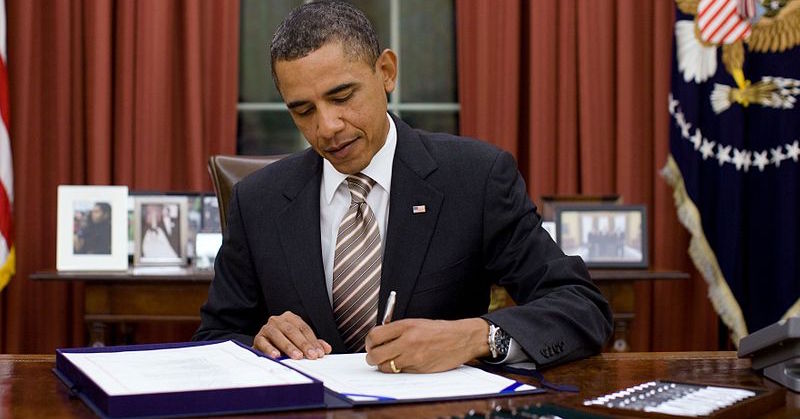 Enjoy the holidays, because when the New Year comes, Barack’s going to throw down some unconstitutional “executive orders” on gun control.

After he gets back from his long Christmas holiday in Hawaii, President Obama is planning to use his “executive powers” to tighten gun laws, RollCall is reporting.

Since the San Bernardino terrorist attack (which has nothing to do with access to guns), liberals have been apoplectic about more and more gun control.

From limiting purchases, to banning people on the sketchy “no-fly” list, to background checks, the dictates will come down soon after Obama returns.

Obama doesn’t care that the American people are decidedly against him on this one.

A recent CNN/ORC poll suggests the American public is siding with GOP arguments. The survey found a majority (52 percent) of those polled oppose tighter gun laws. And a Washington Post/ABC News poll found 53 percent are against the assault weapons ban the White House has endorsed.

So far, the White House is keeping its plans — and the details of its legal review — under wraps. But sources say the administration is zeroing in on the definition of just who is in the gun sales realm.

“What we expect is that they are going to better define what it means to be ‘in the business’ of selling firearms,” said a source with knowledge of the administration’s thinking. Congressional aides say they are hearing similar rumblings.

Congressional Republicans and the White House are at a standoff over access to guns. That’s because GOP members hear “stricter gun laws” and process it as attack on their Second Amendment rights, while the administration describes tighter laws as “common sense steps” after a spate of mass shootings during Obama’s tenure.

The White House has bluntly accused many Republican lawmakers with being too afraid of the powerful National Rifle Association to advocate for even modest changes. But, in the wake of San Bernardino shootings and revelations that the shooters were inspired by the Islamic State, it is clear Obama intends to do what he can with or without congressional backing.

“There are common-sense things that can be done that would make our country safer, that would make it harder for criminals and the mentally ill to get their hands on a firearm,” Earnest said. “And we can do that without undermining the basic constitutional rights of law-abiding Americans.”

Obama used a prime-time Oval Office address earlier this month to, in part, turn up the pressure on Congress to act.

“To begin with, Congress should act to make sure no one on a no-fly list is able to buy a gun,” he said. “What could possibly be the argument for allowing a terrorist suspect to buy a semi-automatic weapon? This is a matter of national security.”

Speaker Paul D. Ryan, R-Wis., has countered the administration’s gun arguments by saying anyone, including American citizens, “can arbitrarily be placed on the no fly list,” adding officials must “respect due process.”

Obama on Wednesday hosted former New York Mayor Michael Bloomberg in the Oval Office, with gun control the topic of conversation. As the chief executive of the “Big Apple,” Bloomberg is a big gun-grabber.

The White House said Obama and Bloomberg “discussed ways to keep guns out of the hands of those who should not have access to them and what more could be done at the state and local level to help address gun violence in America.”