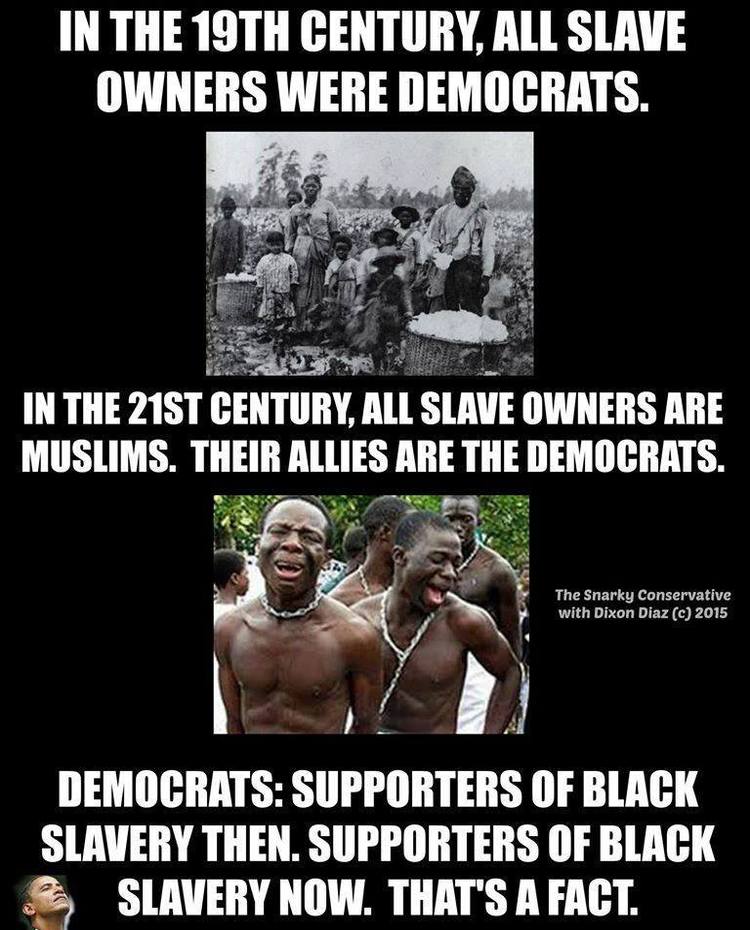 Robert Gehl reports back in 1857, in a landmark decision, a Supreme Court packed with Democrats determined that not only was Dred Scott not a citizen, not only that he was property – but that black people might actually benefit from slavery.

It wasn’t until Republicans pushed through the 13th Amendment in 1865 that slavery was finally abolished in America. Democrats in the south tried to scuttle the new law with Jim Crow laws and other rules designed to keep blacks enslaved, but eventually that went down as well, writes Bill Federer at WorldNetDaily.

On Feb. 5, 1866, Republican Rep. Thaddeus Stevens introduced legislation to give former slaves “40 acres and a mule,” but Democrats opposed it, led by President Andrew Johnson. On April 9, 1866, Republicans in Congress overrode President Johnson’s veto and passed the Civil Rights Act of 1866, conferring rights of citizenship on freed slaves.

To force Southern states to extend state citizenship rights to former slaves, Republicans in the U.S. House passed the 14th Amendment, May 10, 1866, as did the Senate, June 8, 1866. One hundred percent of Democrats voted against it.

Republican Rep. John Farnsworth of Illinois stated, March 31, 1871: “The reason for the adoption (of the 14th Amendment) … was because of … discriminating … legislation of those states … by which they were punishing one class of men under different laws from another class.”

This Democrat affinity for racism continued through the 19th century and into the 20th century.

Republican President Theodore Roosevelt stated Dec. 3, 1906: “White men are lynched, but the crime is peculiarly frequent in respect to black men. … Governor Candler, of Georgia, stated … ‘I can say of a verity that I have, within the last month, saved the lives of half a dozen innocent Negroes who were pursued by the mob, and brought them to trial in a court of law in which they were acquitted.’ As Bishop Galloway, of Mississippi, has finely said: ‘The mob lynches a Negro charged with rape will in a little while lynch a white man suspected of crime. Every Christian patriot in America needs to lift up his voice in loud and eternal protest against the mob spirit that is threatening the integrity of this Republic. …’”

Republican President Theodore Roosevelt continued: “There is but one safe rule … that is, to treat each man, whatever his color, his creed, or his social position, with even-handed justice. … Reward or punish the individual on his merits as an individual. Evil will surely come in the end to both races if we substitute for this. … Every lynching represents … a loosening of the bands of civilization. … No man can take part in the torture of a human being without having his own moral nature permanently lowered. Every lynching means just so much moral deterioration in all the children who have any knowledge of it, and therefore just so much additional trouble for the next generation of Americans.”

In 1953, Republican Vice President Richard Nixon chaired a committee which sought to eliminate discrimination on the basis of race or color in the employment practices of government contractors. In 1957 and 1959, Republican President Eisenhower proposed civil rights bills to enforce the 15th Amendment, strengthening the rights of African-American to vote. Senate Democrats filibustered the bills and watered them down.

After the Birmingham Children’s Crusade Protest, where police dogs and fire hoses were used against African-Americans, President John F. Kennedy called for a bill emulating the Republican Civil Rights Act of 1875.

Southern Democrats fervently opposed it, as Democrat Sen. Richard Russell in 1964: “We will resist to the bitter end any measure or any movement which would have a tendency to bring about social equality and intermingling and amalgamation of the races in our (Southern) states.”

Democrat Sen. Strom Thurmond stated in 1964: “This so-called Civil Rights Proposals, which the President has sent to Capitol Hill for enactment into law, are unconstitutional, unnecessary, unwise and extend beyond the realm of reason. This is the worst civil-rights package ever presented to the Congress and is reminiscent of the Reconstruction proposals and actions of the radical Republican Congress.”

The phrase “the bribe or the bullet” refers to positive or negative human motivations, like in the case of generations of past parents who motivated children with a piece of candy for obedience or a swat to the rear for disobedience.

From the Civil War to Lyndon Johnson, Southern Democrats were accused of engaging in negative motivation and intimidation tactics to keep African-Americans from voting.

As television and media coverage of these tactics grew, it resulted in bad press for the Democratic Party. Political strategists proposed a switch from “the bullet” to “the bribe,” from “intimidation” to “entitlement.”

In other words, if the African-American vote could no longer be suppressed, then maybe it could be manipulated and controlled through dependency on entitlement programs.

Even though Democrat senators filibustered the Civil Rights legislation nonstop for 71 days, from March 30 to June 10, President Lyndon Johnson persuaded the leaders of his party to support a compromised bill, which he signed July 2, 1964.

Then came LBJ’s “War on Poverty, which did more to harm the African-American community than any other federal program.

Beginning in the 1960s, educational emphasis migrated from strictly academic achievement to include more behavior modification. Voters who were less educated tended to be more easily manipulated, as foreshadowed in the pre-Civil War South where it was a crime to teach slaves to read.

In a tragic irony, growing dependency on government handouts appeared reminiscent of the dependency that existed on Southern Democrat plantations where slaves waited for handouts from their masters.