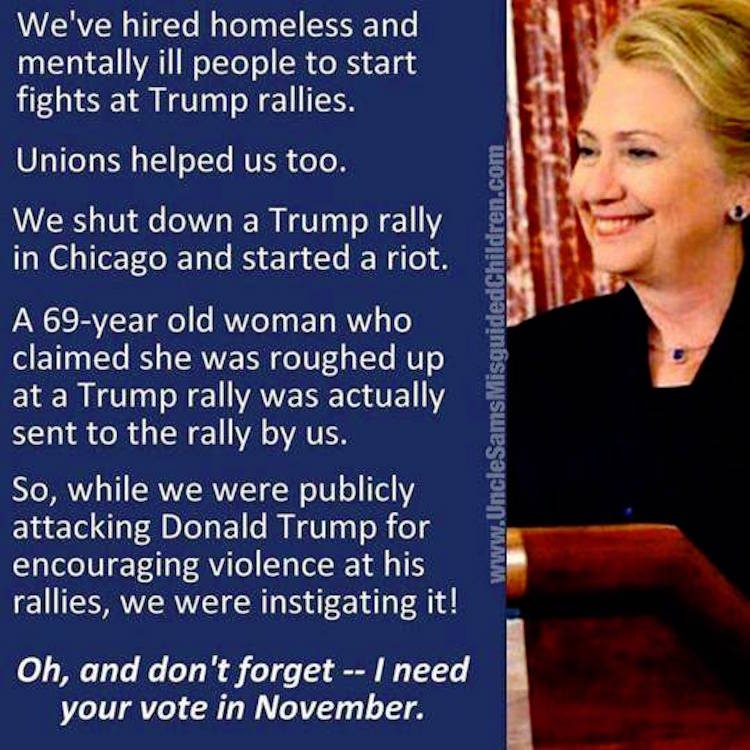 Regan Pifer observes that when Hillary Clinton’s supporters say they are with her, they must also mean that they lie for her.

When no trouble exists, Clinton supporters create trouble. And say anything to cast a poor light on Trump and Trump supporters.

Their foul play even extends to claims of physical violence towards women.

The bad news for them (as it has been for Hillary) is that the truth always, eventually comes out.

A woman who accused a Donald Trump supporter of punching her outside a Trump rally in North Carolina is backtracking after James O’Keefe and Project Veritas released video showing Democrat operatives claiming she was a trained activist.

69-year-old Shirley Teter of Asheville now says it is possible that 73-year-old Richard L. Campbell merely touched her accidentally, as his attorney had claimed all along.

Originally, Harris told local ABC News affiliate WLOS, “He stopped in his tracks, and he turned around and just cold-cocked me.” She also added a pointed, rhetorical question — namely, whether “people find a Trump supporter punching her in the face deplorable.”

Now, however, Teter is changing her story rather dramatically. She told WLOS on Wednesday that “it’s possible that he could have struck her with his backhand.”

…Facebook video of the altercation shows Campbell — who suffers poor vision as a result of cataracts — being led through a gauntlet of anti-Trump protesters by his wife.

In the video, Teter then follows Campbell and appears to reach for his shoulder. His attorney told Breitbart News that he turned around after being touched, and Teeter then fell down.

You want to know what is really deplorable, Teter? You serving as a lying minion for your lying queen.

And the victim? A poor, older man with cataracts who just wanted to peacefully attend a rally.

I understand how getting “cold cocked” by an intimidating Trump supporter is essentially the same as picking a fight with a quasi- blind man and collapsing like you took a charge in the NBA.

But how can we blame Teter? She teeters around the truth like the Hillz.

If only we could catch all of Clinton’s (and her supporters) lies on video. What a glorious day that would be.