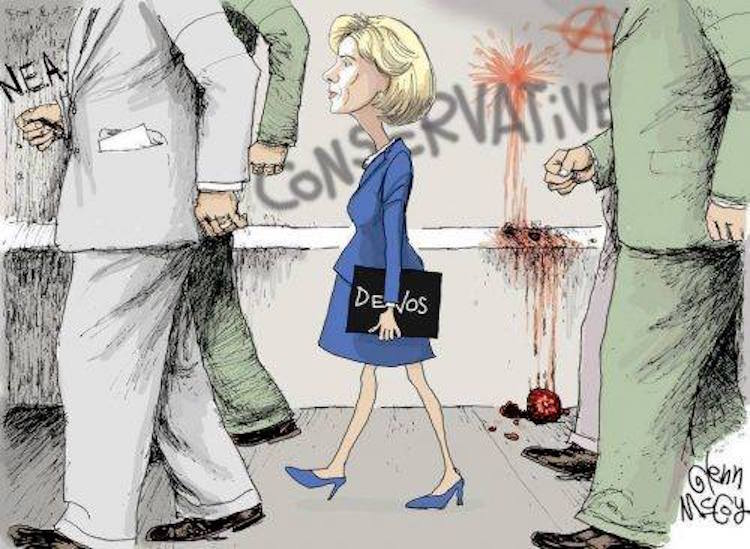 C.E. Dyer reports that the president of the American Federation of Teachers (AFT) took aim at the Senate’s Tuesday confirmation of Betsy DeVos for Education Secretary. Laughably, she accidentally made the case for why DeVos was a great choice.

“If she wants to work with the educators who work hard every single day—in districts as diverse as McDowell County, W.Va., Detroit, and Scarsdale, N.Y.—to provide children the opportunities they deserve, we renew our invitation to have her visit America’s public schools and see the strategies that work for kids,” Randi Weingarten said in a statement following the vote.

“But it’s more likely we’ll now hear the same trashing of public schools that the disrupters, the privatizers and the austerity hawks have used for the last two decades. That makes this a sad day for children.”

Weingarten, along with other major teachers unions, has been a vocal opponent of DeVos’s nomination, arguing that she lacks public school experience. She said Tuesday that one bright spot of DeVos’s confirmation is that the public has become more vocal about education and will serve as “a check and balance.”

DeVos has been a lightning rod for criticism since her shaky confirmation hearing last month. The billionaire GOP donor is a longtime supporter of charter schools and school choice, and critics have sought to frame her as an opponent of public education.

“DeVos’ confirmation battle has a major silver lining: The public in public education has never been more visible or more vocal, and it is not going back in the shadows,” Weingarten said.

“This same public—from rural towns to urban centers, from liberals to conservatives—will now serve as a check and balance, and they will be fierce fighters on behalf of children.”

Let’s see. Two groups that are terrified of DeVos: teacher’s unions and Democrats.

I’d say that alone shows that President Donald Trump got it right when he nominated DeVos.

The teacher’s unions and Democrats have long exploited the public school system and children for their own gains, and DeVos threatens their money-making, leftist indoctrination factory setup.

Times are changing and business as usual is over.