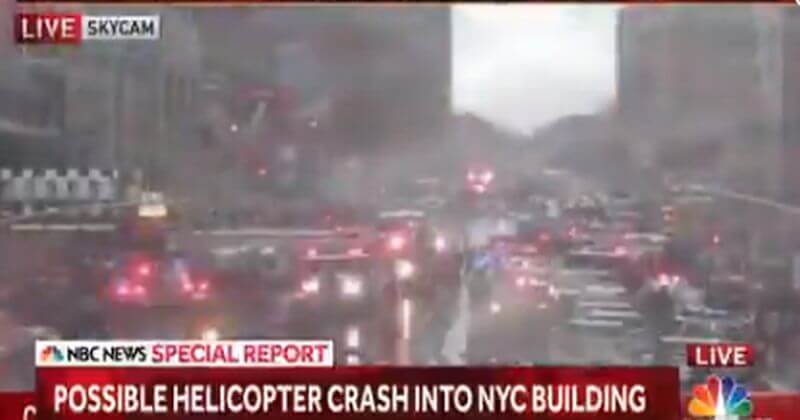 Reuters is reporting that a helicopter just crashed into a building in New York City:

“A helicopter crashed onto the roof of a building in Midtown Manhattan on Monday, the New York City Fire Department said. (Initial reports indicated the helicopter had crashed into the building)

The department said on Twitter that firefighters were on the scene of the crash landing, which took place in rainy weather. It was not immediately clear if anyone was hurt or killed in the incident.

Dozens of emergency vehicles swarmed the area around Seventh Avenue between 51st and 52nd streets, a few blocks north of Times Square.

Governor Andrew Cuomo, who was at the scene soon after the crash, told reporters that it appeared a helicopter attempted a forced emergency landing on the roof and that there were no reported injuries.

NEW: Governor Cuomo is on the scene of the helicopter crash in midtown Manhattan. https://t.co/yMaIx5IW94 pic.twitter.com/D02CwRfzDe

Police and fire officials were responding to reports of a helicopter crashing into a building in Midtown Manhattan https://t.co/o5CNk3sqtg

BREAKING: “It is swarming with police officers, emergency vehicles, fire trucks, and everybody is looking up.” @rehemaellis reports from 7th Ave and 51st Street in Manhattan on a possible helicopter crash into a New York City building pic.twitter.com/kkotKpzDJn

Not terror related, according to preliminary reports, per Governor Cuomo:

NYC Fire Department is responding to a helicopter crash landing at a high rise building on 7th Ave in midtown Manhattan https://t.co/YX2JuTMmQL

.@NYGovCuomo: “The preliminary information is that there was a helicopter that made a forced landing, emergency landing or landed on the roof of the building.” https://t.co/koKWDnOfy8 pic.twitter.com/OjPjZXsp8H

.@NYGovCuomo: There was a fire that occurred as the helicopter hit the roof of a Midtown Manhattan building, but the fire department “believes” the fire is under control. https://t.co/koKWDnOfy8 pic.twitter.com/ncHUFdQ9jW

JUST IN: NY Gov. Andrew Cuomo on Midtown helicopter crash: “The only indication was a helicopter had to do an emergency or a hard landing, or crashed onto the rooftop of a building…There’s no indication of anything more than that.” https://t.co/XPYSs1JpLj pic.twitter.com/mATmAOIUtW

One person has died:

BREAKING: One person has died after a helicopter crashed onto the roof of a Midtown Manhattan building in a hard landing, official says. https://t.co/nqCc9vUVmO