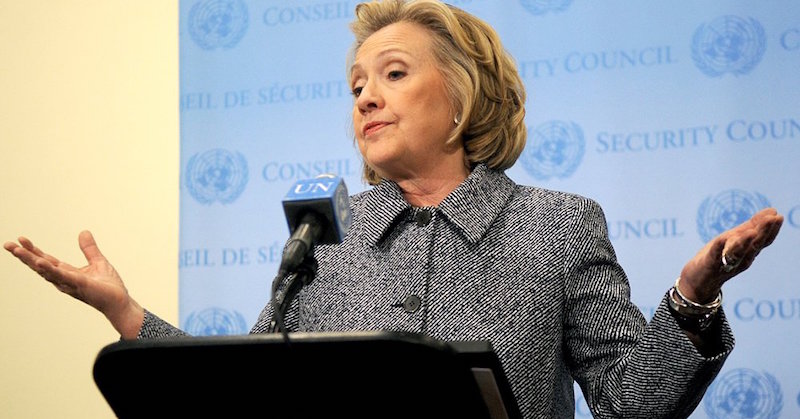 While it’s true that Hillary seems to be off the hook for her gross mishandling of classified information, baffling incompetence, and perjury before Congress, there’s still the little matter of all the lies on her website that have been completely debunked.

In a 4,000 word “fact sheet” on her website, The Daily Caller found no fewer than 35 “lies, half-truths, obfuscations, evasive statements and falsehoods” about her homebrew email server.

This “fact sheet” purports to be the final, accurate word from the Clinton Campaign to the FBI investigation. The Clinton campaign relies on it so much that Inspector General Steve Linick said that Clinton’s team refused to be interviewed and instead told Linick to read their “fact sheet.”

So, one by one, here are the 35 lies that Hillary Clinton is still spouting about her email scandal:

This is the first sentence of the “fact sheet,” and it sets the tone for the rest of the document. The FAQ leaves numerous questions unanswered, as the rest of the Clinton campaign’s responses show.

Lie #2 – “Her usage was widely known to the over 100 State Department and U.S. government colleagues she emailed, consistent with the practice of prior Secretaries of State and permitted at the time.”

Clinton’s email habits were not consistent with her predecessors nor was her practice of exclusively using a personal email account permitted. Colin Powell, who served at the beginning of George W. Bush’s term, used a personal AOL account to conduct some government business. But he did not have a private server in the basement of his home. Condoleezza Rice did not use email at all.

The State Department’s IG report, released in May, explicitly stated that Clinton’s email system was neither allowed, nor was it approved by anyone other than Clinton. The report states that State’s Bureau of Diplomatic Security and Information Resource Management division would not have okayed the system “because of the restrictions in the [State Department Foreign Affairs Manual] and the security risks in doing so.”

Lie #4 – “Clinton only used her account for unclassified email.”

Lie #5 – “No information in Clinton’s emails was marked classified at the time she sent or received them.”

FBI investigators discovered three emails that bore classification markings when they were sent to Clinton. Clinton and the State Department have claimed that two of the emails should not have had markings and that they were left there because of “human error.” There is no evidence that Clinton raised any concerns about the improperly marked email at the time she received it, however.

Lie #6 – “Clinton hopes the State Department and the agencies involved in the review process will sort out as quickly as possible which of the 55,000 pages of emails are appropriate to share with the public.”

There is not a factual misstatement here. But Clinton’s actions leading up to the email scandal and and throughout strongly suggest that she has no interest in sharing information with the public.

Lie #7 – “Classified information was viewed in hard copy while in the office.”

Clinton viewed classified information on her personal BlackBerry, which she almost exclusively used to send and receive emails. She was not allowed to use that BlackBerry at her office for security purposes.

Lie #8 – “While on travel, the State Department had rigorous protocols for her and traveling staff to receive and transmit information of all types.”

Clinton used her commercial-grade BlackBerry to transmit information, even while overseas. A Daily Caller investigation showed that Clinton sent dozens of emails while in spy-riddling nations like China and Russia.

Lie #9 – “A separate, closed email system was used by the State Department for the purposes of handling classified communications, which was designed to prevent such information from being transmitted anywhere other than within that system.”

Lie #10 – “Is Department of Justice conducting a criminal inquiry into Clinton’s email use? No.”

In his statements last week, Comey said he would not be recommending charges against Clinton for mishandling classified information. Criminal charges were possible, which means that the investigation was criminal in nature.

Lie #11 – “This was not criminal in nature as misreported by some in the press.”

The investigation was criminal in nature.

Lie #12 – “Clinton hopes … that the release will be as timely and as transparent as possible.”

This one is a judgment call. But Clinton has been hammered repeatedly, including by liberal members of the press, for refusing to come clean about her email setup.

The Justice Department requested Clinton’s server, and she gave it to the agency. It ended up in the hands of FBI investigators. Clinton did not hand over the device because she is magnanimous.

Lie #14 – “Clinton has pledged to cooperate with the government’s security inquiry.”

The government was conducting an investigation, not a security inquiry.

Lie #15 – “Even if Clinton’s emails had been on a government address and government device, these questions would be raised prior to public release.”

Clinton makes this statement in order to defend against charges that she sent or received classified information, as if that was the only critique of her email practices. But it obscures the fact that she used a private email system that consisted of a server housed in her basement.

Lie #16 – “It was her practice to email government employees on their ‘.gov’ email address. That way, work emails would be immediately captured and preserved in government record-keeping systems.”

This is a deceptive statement. It is unlikely that Clinton emailed government officials on their .gov email accounts just so that the records would be captured and preserved for record-keeping purposes. And it places the burden of protecting those records on her email partners.

Lie #18 – “In providing these emails to the Department, Clinton included all that she had that were even remotely work-related.”

This is flatly false. Comey said that FBI investigators recovered “several thousand” emails from Clinton’s server that she did not give to the State Department. The majority were most likely deleted by Clinton’s legal team after the review of her email account was conducted in Fall 2014.

Clinton claims that the trove of emails she gave the State Department was “over-inclusive” because the agency deemed around 1,250 to be personal in nature. But she was actually under-inclusive given that she failed to turn over the “several thousand” emails that the FBI later recovered.

Lie #21 – “As Clinton has said before, these were private, personal messages, including emails about her daughter’s wedding plans, her mother’s funeral services and condolence notes, as well as emails on family vacations, yoga routines, and other items one would typically find in their own email account.”

“Several thousand” of the emails Clinton had deleted were not “private, personal messages.” The FBI is reportedly turning those records over to the State Department, and they could be made available through the Freedom of Information Act.

Lie #22 – “As noted, the emails that Clinton chose not to keep were personal emails — they were not federal records or even work-related.”

Lie #23 – “In March 2015, when Rep. Gowdy issued a subpoena to Clinton, the State Department had received all of Clinton’s work-related emails in response to their 2014 request.”

Lie #24 – “Were any work items deleted in the course of producing the printed copies? No.”

Lie #25 – “This entailed a multi-step process to review each email and provide printed copies of Clinton’s emails to the State Department, erring on the side of including anything that might be event potentially work-related.”

Flatly wrong, as noted above. Clinton’s campaign has given inconsistent statements about the “multi-step process” used to search her emails for work-related records. Last March, her campaign spokesman, Nick Merrill, told Time that Clinton’s lawyers read all of her emails. Last week Comey said the lawyers used keyword searches to narrow down possibly work emails but did not read all of the records.

Lie #26 – “Did she withhold any work emails? She provided the State Department with all work and potentially work-related emails that she had, including all of her correspondence with Sid Blumenthal.”

Lie #27 – “She has also taken the unprecedented step of asking that those emails be made public.”

This is a deceptive statement. Clinton took an unprecedented step by asking that her emails be made public knowing that the State Department would not unilaterally release the records. Nor would they do so without a thorough review or through the FOIA process.

The most unprecedented step Clinton took was to use a private email server to maintain a personal email account. No other cabinet official is known to have done that in the history of the United States.

Lie #28 – “After her work-related emails were identified and preserved, Clinton chose not to keep her private, personal emails that were not federal records, including emails about her daughter’s wedding plans, her mother’s funeral service, family vacations, etc.”

Lie #29 – “The server for her email was physically located on her property, which was protected by U.S. Secret Service.”

This is a deceptive non-sequitur intended to leave the impression that Clinton’s email server was safe and secure. But the greatest threat to the server was not physical in nature. It risked being hacked through the Internet.

Lie #30 – “The security and integrity of her family’s electronic communications was taken seriously from the onset when it was first set up for President Clinton’s team.”

This is self-evidently wrong. Clinton must not have taken the security of her electronic communications seriously if she used an email account hosted on a private server housed in the basement of her home to send classified government emails. Both the State Department IG report and Comey noted that Clinton’s system required an around-the-clock team of technicians to ensure its security. She did not have that. Bryan Pagliano, a State Department information technology specialist who had worked on her 2008 campaign, managed the system. State Department records suggest that Pagliano was underqualified for the job.

Lie #31 – “Suffice it to say, robust protections were put in place and additional upgrades and techniques employed over time.”

Lie #32 – “Was the server ever hacked? No, there is no evidence there was ever a breach.”

Clinton cannot definitively say that her server was not hacked, as Comey suggested last week. He said that there is no “direct evidence” that the server was hacked. But he also said that it was unlikely that sophisticated foreign hackers would leave direct evidence. Comey said it would not be surprising to find out that the server was hacked since Clinton accessed her email system through her personal BlackBerry while traveling overseas and emailing with friends on their commercial email accounts.

Lie #33 – “Was there ever an unauthorized intrusion into her email or did anyone else have access to it? No.”

Clinton cannot definitively say her email was not breached.

Lie #34 – “Was the State Department able to respond to requests related to FOIA or Congressional requests before they received copies of her work-related emails? Yes.”

Lie #35 – “The State Department was able to search and produce Clinton’s emails when needed long before, and unrelated to, receiving the printed copies as they were already captured on state.gov accounts.”