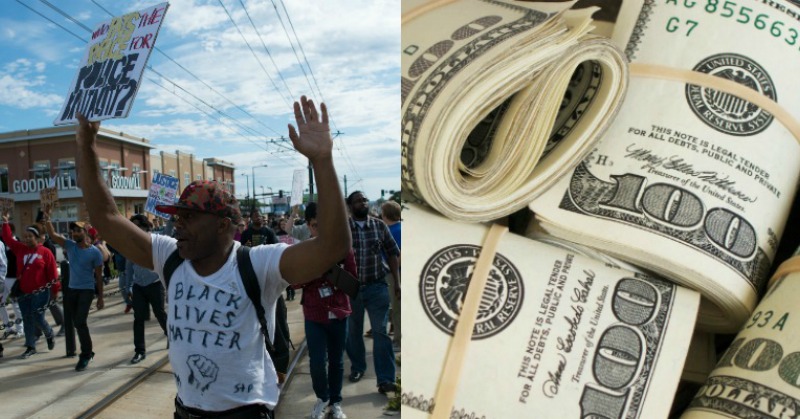 Lifezette reported that the Ford Foundation will be giving millions of dollars to prop up the Black Lives Matter movement according to Fortune Magazine.

The Ford Foundation said the following in an official statement:

By partnering with Borealis Philanthropy, Movement Strategy Center, and Benedict Consulting to found the Black-Led Movement Fund, Ford has made six-year investments in the organizations and networks that compose the Movement for Black Lives.”

According to Lifezette, Borealis Philanthropy said that it wants to “bring $100 million in new resources to the Movement for Black Lives.”

As Lifezette pointed out, there is clear historical basis for this big money funding of left wing political agendas:

But the Ford Foundation’s support of this radical political movement fits a historical pattern. Indeed, this may be the greatest irony of the modern Left — the radical social movements leftists love so dearly only fuel the power of the massive corporate and financial interests they claim to despise.”

Lifezette notes that big money from corporate America funneled into the women’s movement in addition to the acceptance of homosexuality, destigmatization of divorce and the legalization of abortion have greatly reduced the amount of nuclear families in America noting that the president of Planned Parenthood, Cecile Richards is a Ford Foundation trustee.

It’s also worth noting that the destruction of the nuclear family undoubtedly leads to increases in government dependency — something that is a boon for the left.

Immigration and open borders are another area where Lifezette points out that big money globalists play a major role in shaping the agenda:

But open borders are also a favorite of the globalists. Open borders — and the free movement of cheap labor they facilitate — are an obvious benefit to the global financial elite.

And indeed, open borders immigration is one of the few things on which the ultra-libertarian Koch brothers and far-left activist George Soros agree. The three men’s organizations are both funding the upcoming “Rally 4 Refugees” in Washington, D.C.

The Black Lives Matter movement is built on falsehoods orchestrated by the global elites to foster division within the races.

It’s about time people woke up to the fact that big money is using people as pawns to stoke racial hatred and further their globalist agenda.

The only way to fight against the globalist agenda that seeks to destroy everything America stands for is to stop allowing them to manipulate the public using big money to finance fraudulent and destructive social agenda movements that do nothing but tear us apart.