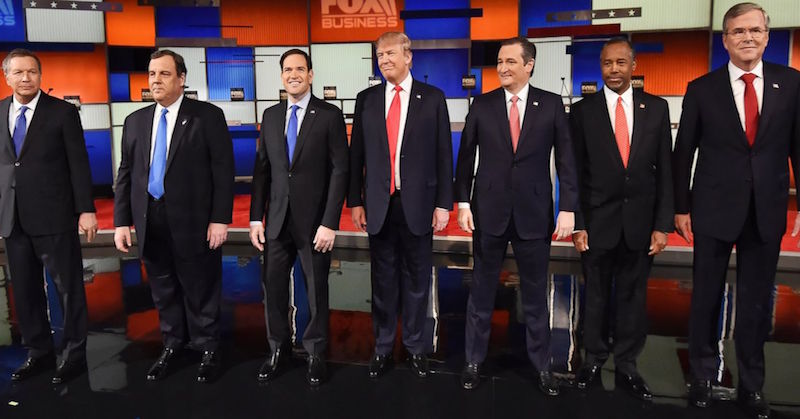 The gloves were off in the first GOP Presidential debate of 2016. With only 18 days until the Iowa caucuses, the seven candidates battled it out to make an impression on the voters.

Like him or not, but New Jersey Gov. Chris Christie is the king of great one-liners against Obama. He started out with “Tuesday night, I watched ‘Storytime with Barack Obama,’ referring to the President’s State of the Union. He also called Obama a “petulant child.” At one point, he turned to the camera and said: “I hope the President is watching tonight because here’s what I’d like to tell him,” Christie said. “… We are going to kick your rear end out of the White House come this fall.”

Carson used a terrifying scenario to attack Barack Obama’s foreign policy. “We have enemies who are obtaining nuclear weapons that they can explode in our exo-atmosphere and destroy our electric grid. (I had to look up where the “exo-atmosphere” was.)

“I mean, just think about a scenario like that. They explode the bomb, we have an electromagnetic pulse. They hit us with a cyberattack simultaneously and dirty bombs,” he said. “Can you imagine the chaos that would ensue at that point? He needs to recognize that those kinds of things are in fact an existential threat to us.”

When asked about his suggestion that we slap a 45 percent tariff on Chinese goods, Trump’s immediate response was to claim it was a lie.

“If they don’t start treating us fairly and stop devaluing and let their currency rise so our companies can compete,” he said, “I would certainly start taxing goods coming in from China.” But it would “never happen,” Trump said. China would cave to pressure to ease their currency manipulation long before such an onerous tariff was ever imposed.

Chris Christie was the only one who brought up entitlement reform. This is the 800-pound gorilla in the room. Rubio and Cruz answered a question about Social and Security by discussing tax reform. Christie crowbarred in with a prepared – but –courageous burn.

“I’d like to interrupt this debate in the Senate to answer the actual question you asked, which is on entitlements,” Christie said.

Rubio tried to protest, but Christie wouldn’t have it: “You already had your chance, Marco — you blew it.”

“The reason why no one wants to answer entitlements up here is because it’s hard,” Christie said. “I’m the only one that has put forward a detailed entitlement reform plan.”

The other Republican candidates talk about strengthening or protecting social security. Christie talks about cutting benefits for the rich.

Ohio Gov. John Kasich was also present at the debate. Reports are he spoke from time to time.

Late in the debate, Cruz and Rubio went after each other on immigration, with both candidates accusing the other of changing their position for political gain. Rubio went deep into the weeds to bring up an example of what he says is Cruz’s political expediency.

“I saw you on the Senate floor flip your vote on crop insurance,” he said. “That is not consistent conservatism. That is political calculation.”

Cruz retorted: “I appreciate you dumping your oppo research folder,” to which Rubio shot back, “No, it’s your record.”

Note: It turns out there is something to Rubio’s “crop insurance” claim, which I’ll admit, slid right past me.

Ted Cruz’s flat-out rejection of any suggestion that he’s somehow ineligible to be president because he was born in Canada to an American mother.

It was the most forceful attack on Trump of the evening, where Cruz pointed out that there are some who insist that both parents must be born on American soil for someone to be considered nationalized. Trump’s mother was born in Scotland, so under those conditions, Trump is disqualified as well.

“On the issue of citizenship, Donald, I’m not going to use your mother’s birth against you,” he said.

Cruz claimed the only reason Trump would bring up his eligibility is because Cruz is rising in the polls.

“Since September the Constitution hasn’t changed, but the poll numbers have,” Cruz said. “I recognize that Donald is dismayed that his poll numbers are falling … but the facts of the law here are clear.”

There was also an interesting exchange where the two candidates seemed to offer each other the vice presidential slot on their ticket:

“I choose him as my vice presidential candidate, and the Democrats sue because we can’t take him along for the ride,” he said. “I don’t like that.”

Cruz replied with a joke — when he’s the nominee, Trump can be his vice presidential pick, and if his citizenship theory is right, Trump will become president.

Donald, you — you very kindly just a moment ago offered me the V.P. slot,” he said. “I’ll tell you what. If this all works out, I’m happy to consider naming you as V.P. So if you happen to be right, you could get the top job at the end of the day.”

Cruz suggested that because Donald Trump is a New Yorker, he has “New York values.” What are those? Maria Bartiromo said she was from New York and she didn’t know.

Trump’s response was perfect. He brought up Sept. 11, 2001, and even Cruz couldn’t counter that:

“We rebuilt downtown Manhattan … everybody in the world loved New York and loved New Yorkers,” he said. “And I have to tell you, that was a very insulting statement Ted made.”

When the moderators asked if Trump wanted to dial back his comments that Muslims should be temporarily banned from emigrating to the U.S., Donald had a one-word answer: No.

Jeb Bush and others tried to convince him otherwise.

“I hope you reconsider this because this policy is a policy that makes it impossible to build the coalition necessary to take out ISIS,” Bush said. “The Kurds are our strongest ally, they’re Muslim.”

“All Muslims? Seriously?” he asked.

“I want security for this country,” he said. “We have a serious problem with, as you know, radical Islam.”

When Cruz was asked about a recent Times article on the candidate not reporting a loan on a federal form, Cruz hit back, saying it was a paperwork error. “But if that is the best hit New York Times has got, they better go back to the well.” It turns out the Times was – well, wrong.