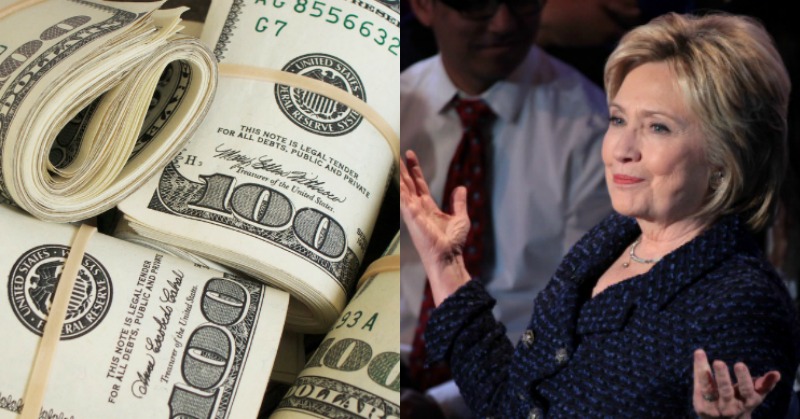 Democrat presidential nominee Hillary Clinton’s corruption truly knows no bounds, and it appears that the Democrat Party is a perfect fit for her.

According to Bloomberg, Clinton’s campaign and the Democrat Party are exploiting a loophole in campaign finance law in order to rake in millions of dollars:

“At least $7.3 million of the DNC’s July total originated with payments from hundreds of major donors who had already contributed the maximum $33,400 to the national committee, a review of Federal Election Commission filings shows. The contributions, many of which were made months earlier, were first bundled by the Hillary Victory Fund and then transferred to the state Democratic parties, which effectively stripped the donors’ names and sent the money to the DNC as a lump sum.”

Clinton’s campaign announced the $32 million had been raised last month as an example of the “energy and excitement” surrounding her campaign. Since no one has ever associated Clinton with “energy” or “excitement,” alarm bells were set off.

The Daily Caller reported that Lawrence Noble, general counsel for the Campaign Legal Center, said the amounts of money involved in the practice “are unprecedented,” calling the practice “a way to get around the contribution limits; it’s a major loophole in the law.”

Robert Kelner, an election law expert at Covington & Burling told Bloomberg that while it may not be illegal, the campaign does appear to be utilizing a big loophole:

“I’m not aware of any case law or regulations that would prohibit a state party from transferring to a national party committee funds raised through a joint fundraising committee. But as a practical matter, it does appear that the DNC may be using Hillary Victory Fund as a mechanism for allowing donors to give more to the DNC indirectly than would otherwise be permitted directly.”

Just how much money gets funneled to the campaign through this loophole? A lot. Bloomberg reported that on average, “83 percent of the money that was sent from the state committees to the DNC in July originated with a donor who had already given the maximum $33,400 to the national party.”

Has Clinton ever done anything that didn’t include massive amounts of corruption? The sad part is, Clinton is embroiled in so much scandal that low-information voters may be overwhelmed by it and easily manipulated by the Clinton Machine.

Hillary Clinton is easily one of the most — potentially the most — corrupt politicians to ever run for the presidency. Hopefully her run ends there with GOP nominee Donald Trump ending her aspirations in November.