I know, right? This only happens once every millisecond.

What is it this time?

It isn’t Happy Meal toys or sugary soda or toy guns, though these issues have been brought up before.

Nope, this time it has to do with a billboard. One stinkin’ billboard.

They call it racist.

And not because the colors on said billboard are segregated with the letters black in black and the background in white. 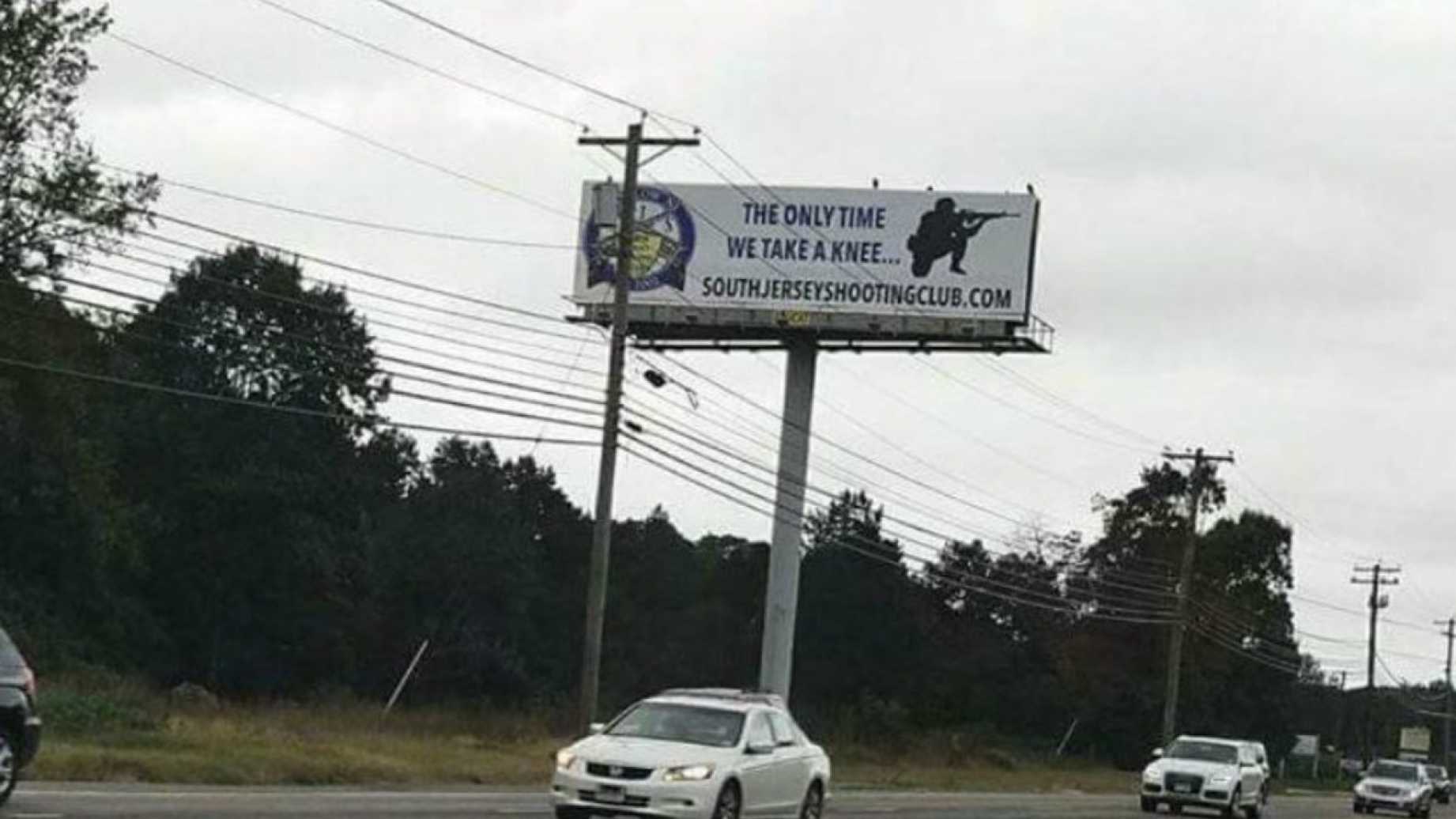 According to The Daily Wire:

A pro-military billboard put up by a gun range in southern New Jersey has been declared “racist” by several activists, including the local chapter of the NAACP and a progressive feminist group, because it takes a shot at the national anthem protests. Despite mounting pressure, the gun range has stood by their message, saying it has “nothing to do with race” and everything to do with expressing “support for our veterans.”

Indeed, these groups are SO offended that they posted images of the billboard around town calling for people to protest along with them.

This billboard on Rt. 73 in Voorhees. Tell them this billboard is racist. Taking a knee is a protest to say NO to police brutality. The women of SJWPC are taking a knee to support black and brown people. Take it down! The Manager is Carmen Console: 609-704-9500.

One member of the Camden County East chapter of the NAACP told The Philadelphia Inquirer, “We’re talking about police murdering unarmed black people.”

Welp, that isn’t what the shooting range was talking about.

They weren’t talking about taking a knee for or against black or brown people.

And they certainly aren’t protesting the murder of black or brown people.

What they are protesting is the fact that tantrum-throwing toddlers wearing NFL jerseys kneel during the national anthem and disrespect soldiers and veterans who have sacrificed everything so you may have your freedom.

So you may kneel with whatever color people you want.

They are taking a stand for the military.

They are honoring those who lost their lives.

They are proud to be Americans.

Unlike most whiny liberals, the shooting range is stating that they always stand for something, some principle.

The only time they kneel is to protect what they stand for.

Whiny liberals, on the other hand, stand for nothing.

Well, that isn’t true. They stand for being offended, judging everything, and snow-flaking their way around this Earth.

They react, they don’t stand.

I couldn’t be happier with how the manager of the shooting range responded:

“I told them the billboard was offensive, and he said, ‘That’s nice,’ and he hung up,” she said. “We’re living in a very difficult time right now. People are trying to stand up for black and brown people to say, ‘Hey this is not right.’ That sign really is just mocking the idea of taking a knee.”

In response to the outrage from left-wing activists, the shooting club said simply that the message isn’t about race at all but about supporting veterans.

“It has absolutely nothing to do with race,” said owner Wesley Aducat. “It’s just support for our veterans.”

As for those who refuse to stand for the anthem, Aducat said he defends their right to protest, but doesn’t agree with the message.

Since Thanksgiving is around the corner, let us give thanks for those in society who haven’t yet lost their mind. Sheesh.