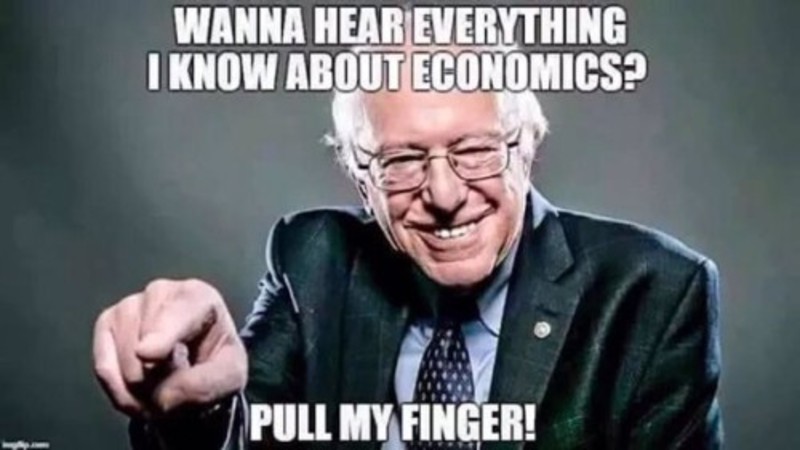 explains why Bernie Sanders’ radical economic ideas could be disastrous for America:

Among the items on the Democratic presidential candidate’s pricey wish list: Medicare for everybody, expanded Social Security, improved national infrastructure, free public college, and paid leave fund for workers. Add them all up, as The Wall Street Journal has, and it comes out to at least $18 trillion in new spending over a decade. That’s nearly $2 trillion more a year, when current annual federal spending is $3.8 trillion. And that massive total doesn’t include Sanders’ universal preschool plan, which is still in the works. That could easily be another $100 billion over a decade.

Can America, its federal debt having doubled since 2007, afford such a spending splurge? Political scientist Lane Kenworthy — like Sanders, a self-described “social democrat” — thinks we can. In his 2014 book, Social Democratic America, he outlines a plan similar to Sanders’, one that would boost federal spending by about 50 percent. Kenworthy notes that right before the Great Recession, total U.S. government spending at all levels totaled 37 percent of GDP. The Sanders/Kenworthy plans would boost that number to about the same as that in France, Sweden, and Denmark.

Just as Republicans tend to be a bit fuzzy on how they would pay for their tax cuts, Sanders has yet to outline a plan to fully pay for his proposals. He’s mused about a 90 percent tax rate on the rich — but the 1 percent aren’t going to pay for everything Sanders wants. If you want to spend like Europe, you also need to tax like Europe, and that means a value-added tax, which Kenworthy concedes. “Adding a national consumption tax could get us halfway there and adjustments would take us the rest of the way,” he writes.

So these big-spending plans would also require a big middle-class tax hike. And keep in mind that the higher taxes would merely pay for new spending, not do anything about whittling down the historically high national debt.

Even more important, these tax hikes and expanded government programs could affect U.S. economic growth and slow the rise of American living standards. We know that Europe’s brand of capitalism seems to come at a price: less economic dynamism. The U.S. economy produces far more fast-growth tech startups than Europe. And the American “unicorns” (startups valued at more than $1 billion) tend to be larger beasts. According to a study by a U.K. investment bank, the cumulative value of all European unicorns created since 2000 is less than half the value of Facebook. We cannot all be like the French or Scandinavians, as economists Daron Acemoglu, James Robinson, and Thierry Verdier have put it: “Their cuddly capitalism… depends in part on the knowledge spillovers” created by American competitive capitalism.

Sanders, although dominating the early nominating states of Iowa and New Hampshire, is still unlikely to be the Democratic nominee. But his ideas about inequality, fairness, and redistribution are where the energy in the party seems to be. Labour just chose a politically and economically calamitous direction. Democrats hopefully won’t echo that mistake.