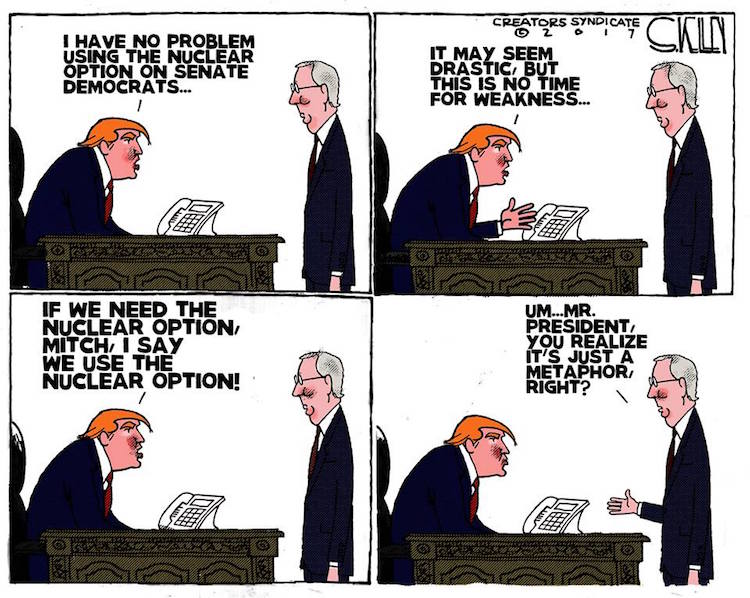 Robert Gehl reports that Sen. Ted Cruz is not mincing words when it comes to the confirmation of Judge Neil Gorsuch to the Supreme Court.

Republicans are anxious to see a conservative successor to the late Justice Antonin Scalia, and most believe Gorsuch is a perfect pick. And they won’t be denied, Cruz told Politico.

“The Democrats are not going to succeed in filibustering the Supreme Court nominee,” Cruz said. “All procedural options are on the table. The bottom line is we will confirm a strong conservative to replace Justice Scalia.”

Senate Minority Leader Chuck Schumer would have been opposed to any nominee that Trump brought forward.

But in 2013, Democrats made a fatal mistake. They eliminated the option to filibuster executive branch appointments. It worked for the left, as Democrats tried to stack the federal court with liberal judges, particularly the DC Circuit Court of Appeals, which reviews federal regulations.

Republicans still officially hold to the original 60-vote filibuster rule, but if it looks like Schumer or any of his compatriots are going to try any shenanigans, they can quickly eliminate that rule.

“The Democrats are not going to succeed in filibustering the Supreme Court nominee,” Cruz said on Tuesday. “All procedural options are on the table. The bottom line is we will confirm a strong conservative to replace Justice Scalia.”

Republicans did not try to filibuster any of Barack Obama’s Supreme Court nominees. The only filibuster attempt in the last 30 years was by Democrats against Justice Samuel Alito, who was nominated by President George W. Bush. That attempt failed and Alito was confirmed.

Cruz has been particularly committed to the Supreme Court fight, floating an indefinite blockade if Hillary Clinton had won and using Trump’s commitment to a conservative justice as his primary rationale for supporting a former rival. But his stance amounts to an escalation of a roiling conflict over the vacant seat.

Cruz has strongly resisted taking options off the table in the past, though some of his colleagues have been less explicit about changing the Senate rules as the nomination has neared.

President Donald Trump has called on Senate Majority Leader Mitch McConnell to kill the filibuster rule if Democrats attempt to resist his pick, but McConnell said that’s not Trump’s call.