The hilarious cartoon below illustrates exactly why everyone needs to stand behind Alec Baldwin after he was charged in the fatal shooting of Rust cinematographer Halyna Hutchins: 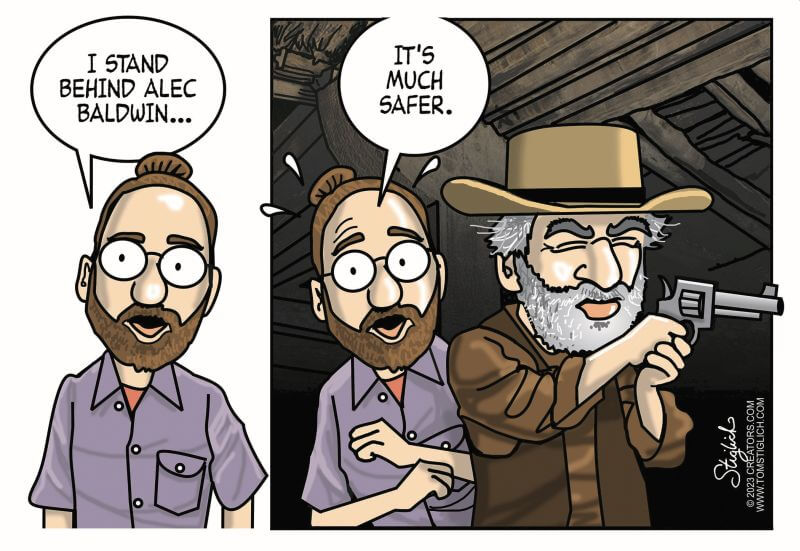 Everyone should stand behind Alec Baldwin because it’s the safest place to be!

Here’s more via the Western Journal:

Set armorer Hannah Gutierrez-Reed will also be charged in relation to the 2021 shooting on the set of the film “Rust.”

Among other things, Carmack-Altwies said that “an actor doesn’t get a free pass just because they’re an actor,” in an interview with CNN on Thursday.

“Every person that handles a gun has a duty to make sure, if they are going to handle that gun, point it at someone and pull the trigger, that it is not going to fire a projectile and kill someone, and this is really about justice for Halyna Hutchins.

“We’ve talked to many actors, A-list and otherwise, that have said that they always check their guns or they have someone check it in front of them,” she said.

“And that’s what’s so important… We’re saying that here in New Mexico, everyone is equal under the law.”

“There was such a lack of safety and safety standards on that set,” she said earlier in the video.

“There were live rounds on set, they were mixed in with regular dummy rounds, nobody was checking those, or at least they weren’t checking them consistently — and then they somehow got loaded into a gun, handed off to Alec Baldwin.

“He didn’t check it. He didn’t do any of the things that he was supposed to do to make sure that he was safe or that anyone around him was safe, and then he pointed the gun at Halyna Hutchins, and he pulled the trigger.”

A conviction on a charge of involuntary manslaughter could lead to up to 18 months in prison and a $5,000 fine, according to Deadline.”