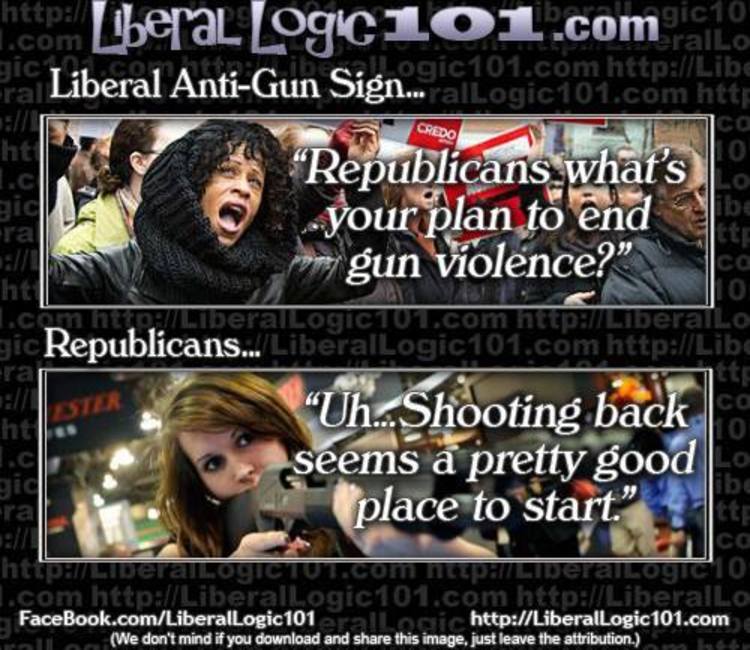 Yet another left wing lunatic exposes the gun control crowd for what they really want to do – BAN ALL GUNS.

This woman is absolutely out of her mind.

Part of her fear of guns probably comes from living in Canada.

From the psychotic mind of a leftist at New Republic:

Ban guns. All guns. Get rid of guns in homes, and on the streets, and, as much as possible, on police. Not just because of San Bernardino, or whichever mass shooting may pop up next, but also not not because of those. Don’t sort the population into those who might do something evil or foolish or self-destructive with a gun and those who surely will not. As if this could be known—as if it could be assessed without massively violating civil liberties and stigmatizing the mentally ill. Ban guns! Not just gun violence. Not just certain guns. Not just already-technically-illegal guns. All of them.

Just ban them because the criminals won’t have them and there will be no more violent crime!!!

How’d the Charlie Hebdo terrorist attack work out when the first police on site weren’t armed?

This woman is obviously a tad insane but it’s not that simple. She continues on for more painful paragraphs.

The first issue shouldn’t be so complicated. It doesn’t take specialized expertise in constitutional law to understand that current U.S. gun law gets its parameters from Supreme Court interpretations of the Second Amendment. But it’s right there in the First Amendment that we don’t have to simply nod along with what follows. That the Second Amendment has been liberally interpreted doesn’t prevent any of us from saying it’s been misinterpreted, or that it should be repealed.

Then she gets even more stupid:

Then there is the privilege argument. If you grew up somewhere in America where gun culture wasn’t a thing (as is my situation; I’m an American living in Canada), or even just in a family that would have never considered gun ownership, you’ll probably be accused of looking down your nose at gun culture. As if gun ownership were simply a cultural tradition to be respected, and not, you know, about owning guns. Guns… I mean, must it really be spelled out what’s different? It’s absurd to reduce an anti-gun position to a snooty aesthetic preference.

Sorry, but there is NO SUCH THING as the ‘gun culture’ and people who grow up in gun control states eventually either FLEE (as I did) or they still go through hoops in their own states to protect themselves.

This hoplophobe doesn’t seem to grasp the concept that in America our fundamental human right to self-defense is actually protected by a Bill of Rights.

In this woman’s world, the over 90 million law-abiding citizens who own firearms shouldn’t be allowed to because a miniscule number of crazies use them to hurt others.

The amount of gun violence compared to the number of gun owners isn’t even a statistical blip on the radar.

But once again, facts don’t matter to people who are afraid of the dark.