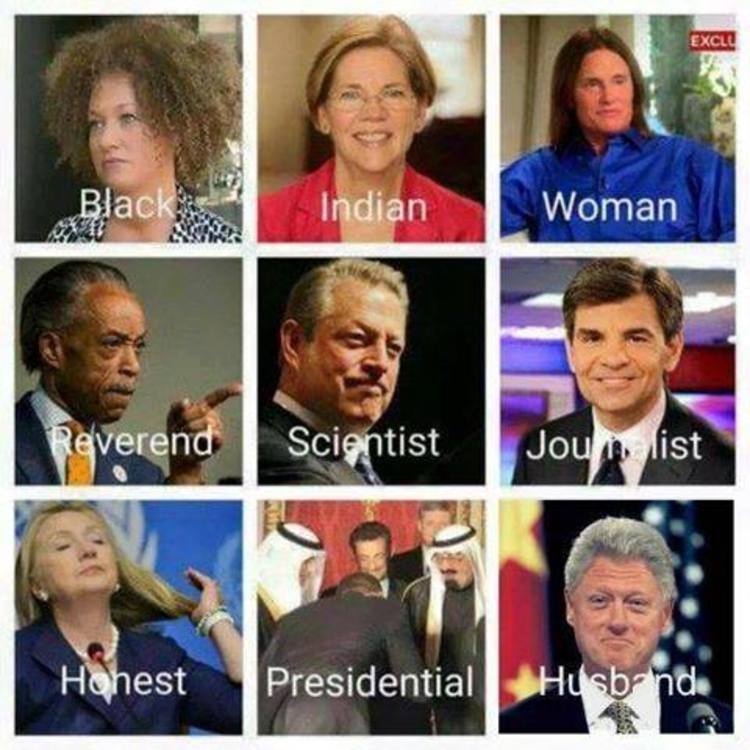 In today’s episode of “everything is racist”: the Flint water crisis.

The water crisis began in April of 2014 but didn’t attract much media attention until the past month. Apparently nobody thought to profit politically from the situation until it was election season.

There was once a time when civil rights activism fought against slavery, then lynching, discrimination, and segregation. Today, the fight is against microaggressions and….. water?

Democrats never miss an opportunity to cry racism even when that assertion makes no sense.

Enter Hillary Clinton, who used the Flint, Michigan, water crisis — where people have been drinking, bathing and cooking with lead-contaminated water — as an opportunity to pander to black voters.

The Democratic presidential front-runner told a mostly black audience at Mt. Zion Missionary Baptist Church in Cedar Rapids, Iowa, on Sunday that the situation was “not just as an environmental disaster and a health crisis,” but “a civil rights issue.”

“If it had been a rich white suburb where the water was brown and smelly, people would have come immediately to the rescue of those families to protect those children to make sure they had the best chance to live up to their God-given potential!” the peddling former secretary of state said.

She appears to have gotten this idea from Michael Moore, who tweeted back in December “This is a racial killing. Flint MI is 60% black. When u knowingly poison a black city, u r committing a version of genocide.”

She also took the opportunity to paint herself as the hero and Republican Gov. Rick Snyder as the villain.

“I started talking about (the crisis) and pointing it out, and created some additional political pressure,” she told the crowd.

“Within two hours (Gov. Snyder) made that request (to the Obama administration for help),” she added.
But Gov. Snyder told “Fox & Friends” a different story on Monday.

“The way this really happened is the community made a decision, the city and the county all wanted to switch away from Detroit’s water system back in 2013 and there was a 7-1 city council vote to say let’s move to this new water authority,” he said.

Seven of the nine members of the city council are black, so it’s questionable how much of a role race could’ve played.

What this really illustrates is the incompetency of government. This isn’t the only contamination crisis in the news today – Chipotle has been making headlines as well. Since Chipotle is a private firm, the differences in the actions undertaken by Chipotle and Detroit illustrate the superiority of the private sector over government. As economist Steve Horwitz puts it: 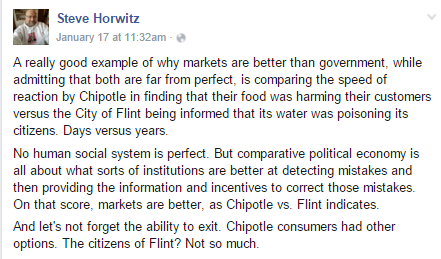 Liberals truly will never let a crisis go to waste – especially ones they helped cause. The great talent of liberals is to knock of off our feet, help us back up, then ask us what we would’ve done without their help.